A lion kill just outside camp! Can you see what is going on here?? 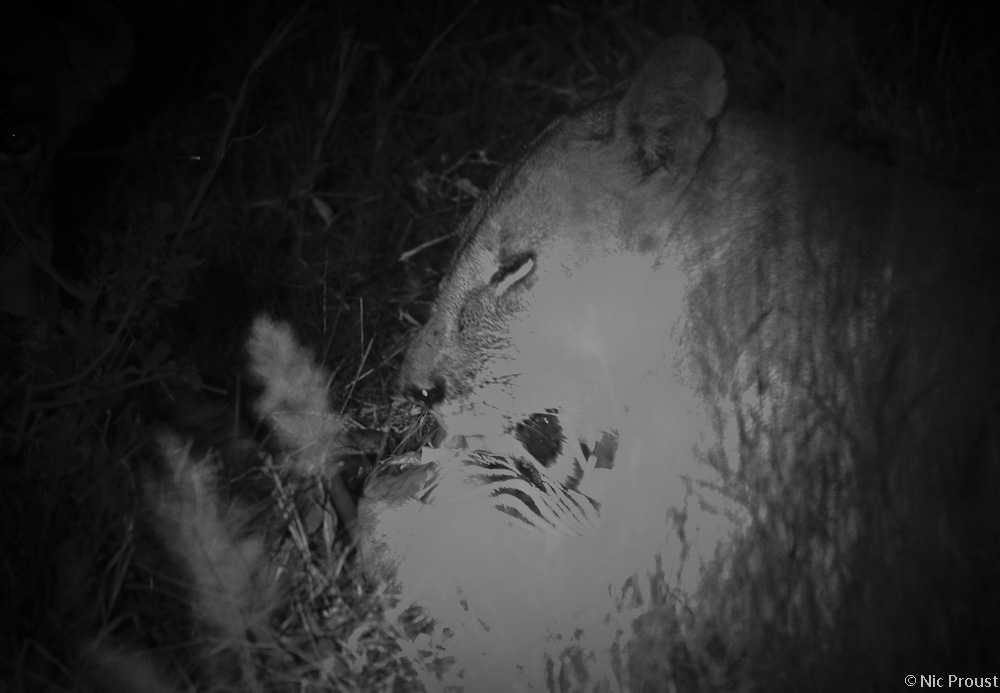 This shot won’t win any awards but my gosh the excitement value was incredible! So you can see a lioness (hopefully) and the stripes of an unfortunate zebra.
Anyway I am back from some leave and it has been a while without my bush fix..so last Saturday I am driving up from Maun to Gomoti Camp (along the eastern edge of the Okavango) to meet some guests. Just on the other side of the vet fence I am surprised to see some kudus, not often do I see them so close to this human settlement. Then not long after that I find a puff adder on the road and I decide to move if off so it doesn’t get run over. That is when I realise there is something special about this first day back in the bush in a while – because I am seeing animals I did not expect to see!
So after some other general game along the way, I get to camp just after sunset and in time to meet the guests coming back from their safari. It’s great to see them but I tell them that I will join them for tomorrow’s activities and that I will retire early to catch up on some much needed sleep!
Well this is the beauty of the bush…as soon as you plan one thing, things change…ofcourse!
Anyway I do 3 trips from my car to room one and feel satisfied that nothing is lurking in the long grass.
I then get to my tent and start deciding whether I should shower at that moment or leave it for about 15 minutes later after unpacking!
Well…one minute I was contemplating this tough decision and the next minute I could hear some sort of thundering noise. It took me a few seconds to realise that there was a seriously large group of Zebra sprinting around. I shone my torch out to see what I could see and I saw another torch shining from the direction of the main guest area. We both realised something was up but shining for another 10 minutes all we could see were zebra sprinting up and down in front of camp giving out their whinnying alarm calls. But still it seemed odd that nothing else was happening. I thought perhaps they were being harassed by hyenas!
I then had that shower and thought I could hear lions fighting. I quickly got out and went across to the guests and their guide Brooks to get an opinion on what was happening. They had not heard the lions but thought the Zebra’s behaviour was strange too! I found a manager and we decided to go and see what we could find!
After about 15 minutes and only a couple of hundred metres from my room we heard the lions growling again. That gave us a direction to follow and so we switched off the vehicle to listen. We could all hear crunching and then followed the noise and there it was..3 lions feeding off a young Zebra! So we watched and we called the guests in and they were able to see this great sighting which got even better when 2 big male lions came in to see what the commotion was about. It became quite comical as the females were too scared to eat what was left, while the males were fighting with each other to try and mate with one of the females! Lots of chasing around ensued and we were left feeling exposed in the open Landover!
Eventually we left the guests and the lions and I returned to my room as it was getting late and my early night was not materializing at all…the adrenaline was pumping still though and sleep was not easy. Incredibly while lying awake I identified 7 species of owls and at the same time the silly male impalas were rutting in all directions not having a care in the world about the lions in the area. At about 2am there was a loud bang right at my tent and I thought the lions were back…I shone my torch outside carefully and there they were…2 crazy impala males having a full on fight in the pitch dark!

This was one lion kill and a lot of action I won’t be forgetting in a while!