In the celebration of World Lion Day we decided to share a few photos taken of these fascinating animals (which also includes a video of some fighting with hyenas over a kill)! So scroll down and enjoy some moments with these incredibly special social cats! You will find some info below each photo as well as some conservation related discussions… enjoy! 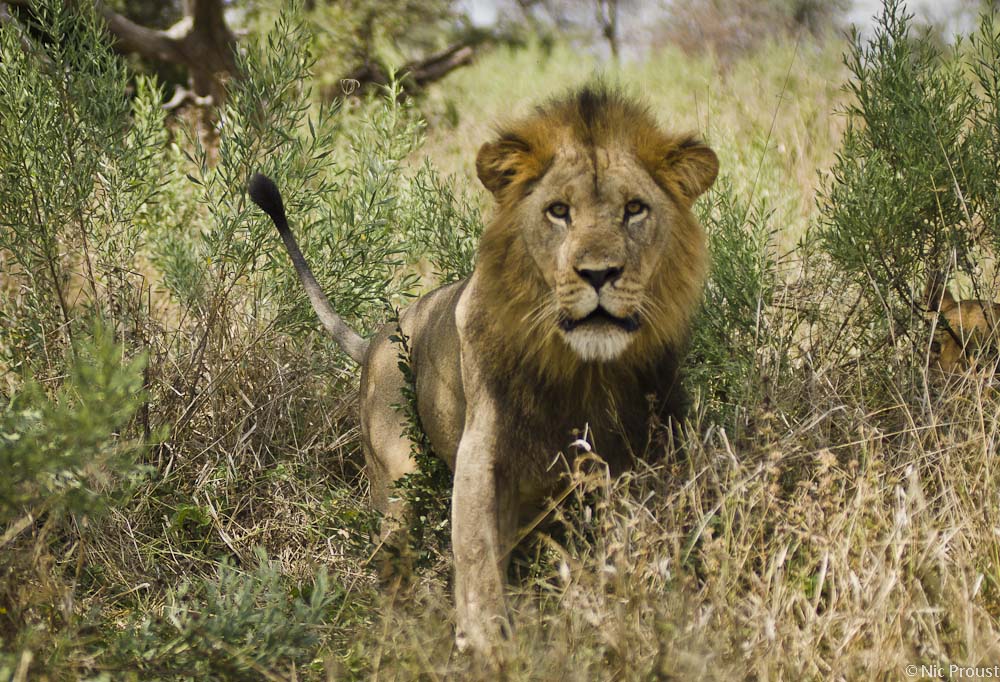 A lion charges my vehicle! I personally hate it when people taunt predators to get the shot. We are seeing this more and more as photographers from around the world try to get original angles in their bid stand out among the rest. Is it right to drive a beetle cam up to sleeping lions? Is it right to get out of your vehicle and lie down to get a low angle shot? I don’t think so and if someone gets killed as a result, then the lions will inevitably be put down or shot. Maybe most of the time it is OK but what happens if you disturb sleeping lions…at the least the next set of tourists probably won’t get to see them! There are too many people out there ruining it for others and even worse risking the lives of these magnificent creatures! This shot was without provoke and what had happened was the male had mated with a female and obviously something to do with him being hyped up in the situation caused him to give a mock charge! 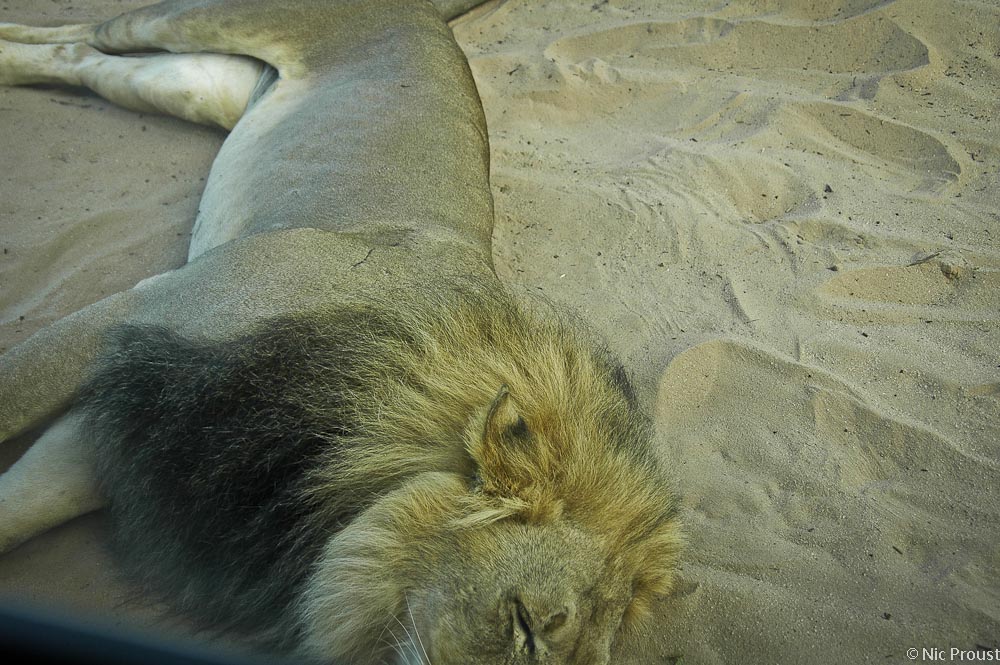 Have you ever been to the Kgalagadi Transfrontier Park? If not do yourself a favour and go and see the big beautiful Kalahari adapted lions…they are amazing and so used to vehicles that they literally won’t move out of the road. Here I had to drive past this individual who did not flinch as the wheel of the vehicle passed within centimeters of his nose! Incredible animals they are and so trusting when treated with respect. Incidentally these cats love using roads as they provide clear paths for them to move across their territories! 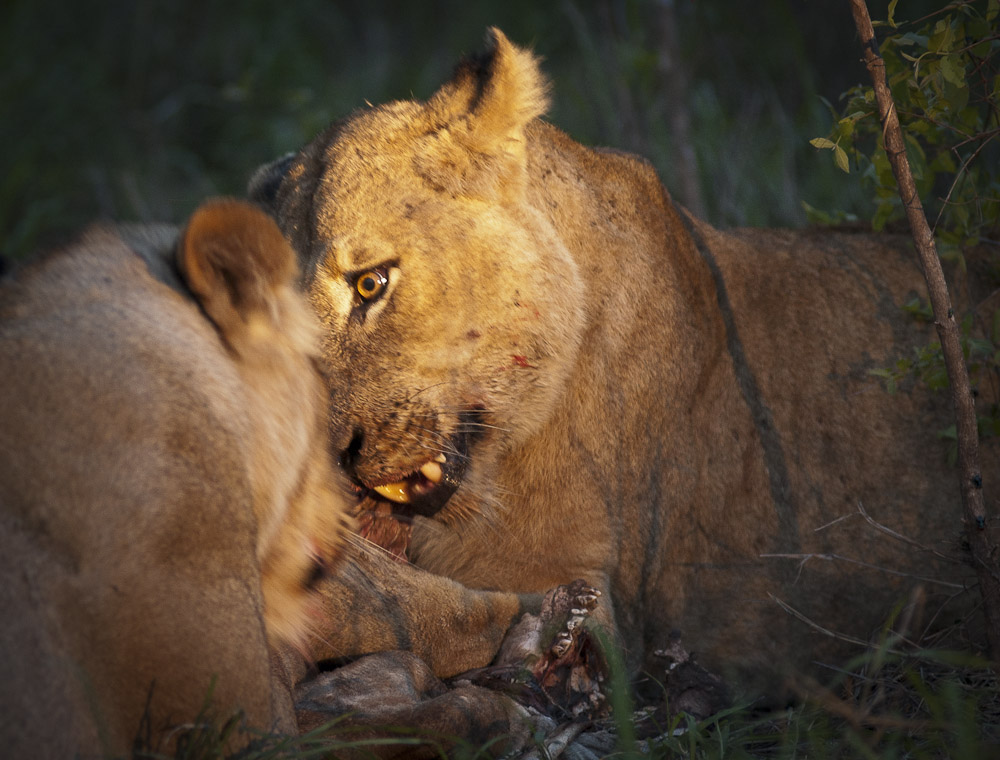 Lions feed aggressively on a giraffe kill! Here we watched with a lot of excitement as the Charleston Pride of lions had caught their second young giraffe in two days. Lions can be so affectionate to one another but when its feeding time that all changes and it is a fight to get in as much meat as possible. Sometimes they will clash heavily but as soon as the feeding frenzy is over they will go back to being affectionate and groom one another as if nothing had happened! 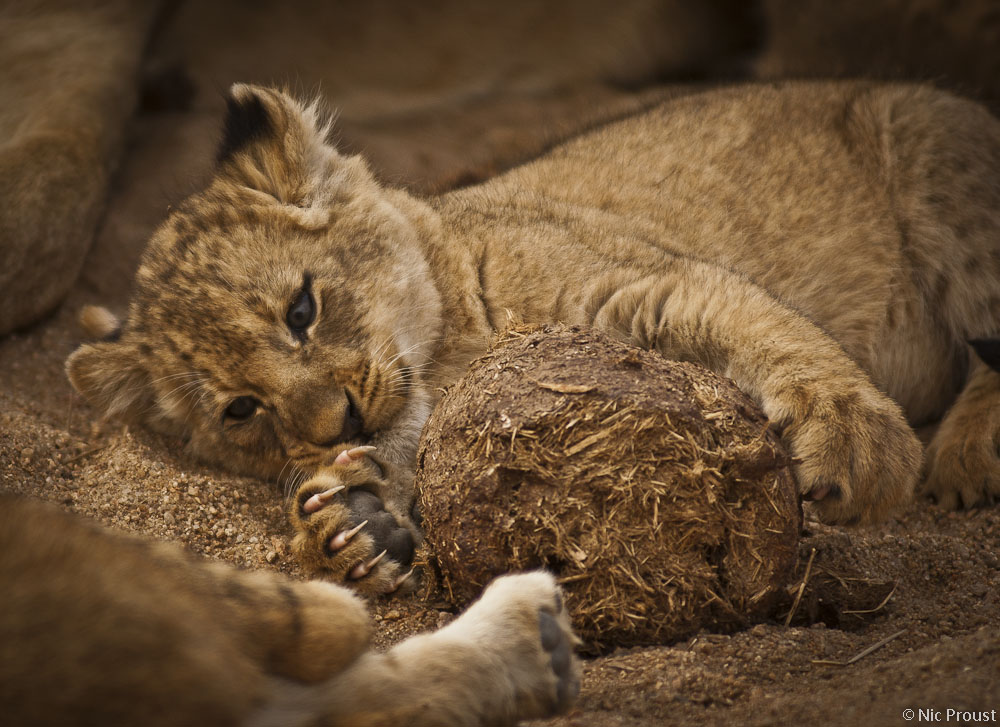 It was an absolute pleasure to watch this young lion cub playing with a piece of elephant dung! 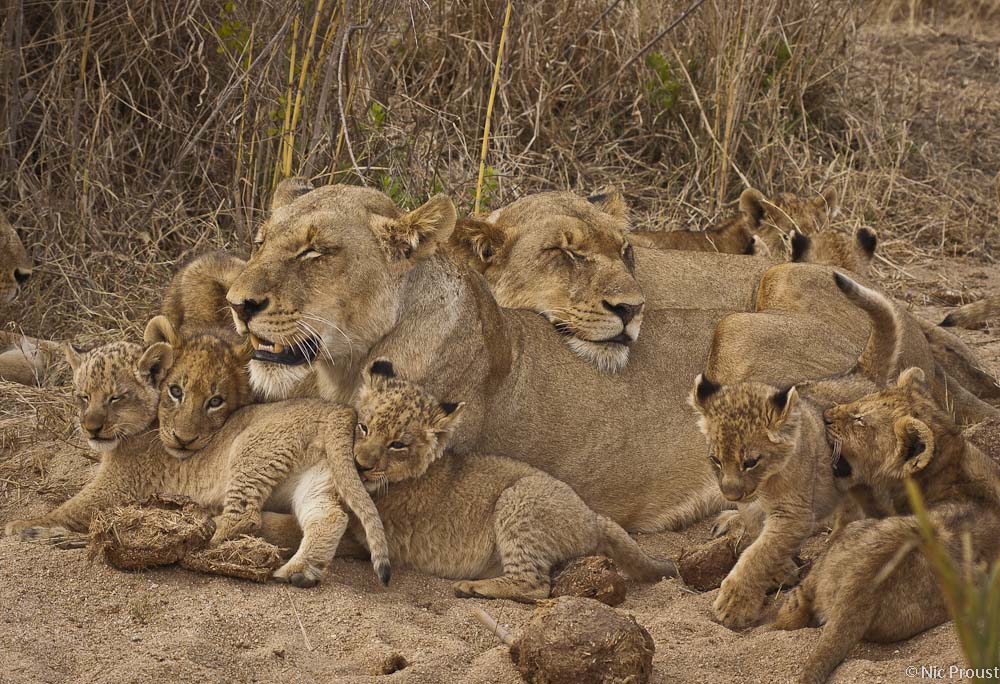 One of my favourite lion shots…this is the epitome of lion pride life! 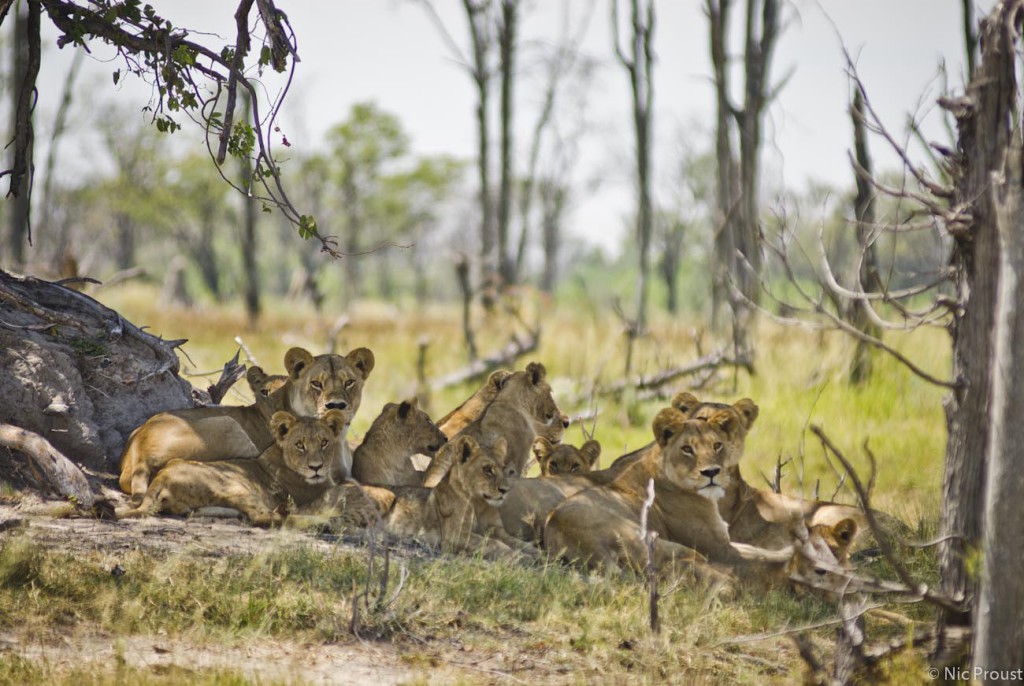 Just a shot of a pride of lions but so great to come across a pride that has almost for sure never seen a humans or vehicle before…this shot was taken on a trip through Chief’s Island in the middle of the Okavango in the Moremi Game Reserve…it is incredible to see lions that don’t know how bad humans are and what threats we pose to them! 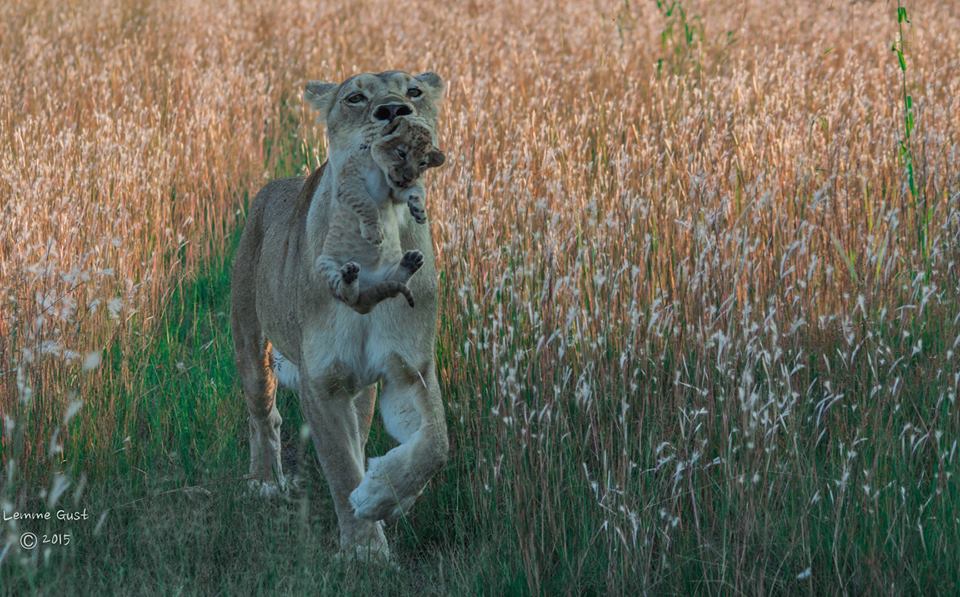 A fantastic shot by friend and Manager/ Guide Lemme Dintwa who captured this amazing shot in Botswana’s Linyanti concession. We know this lioness well and here she almost seems to be showing us one of her latest litter…meanwhile she was actually moving them to a safer den site! 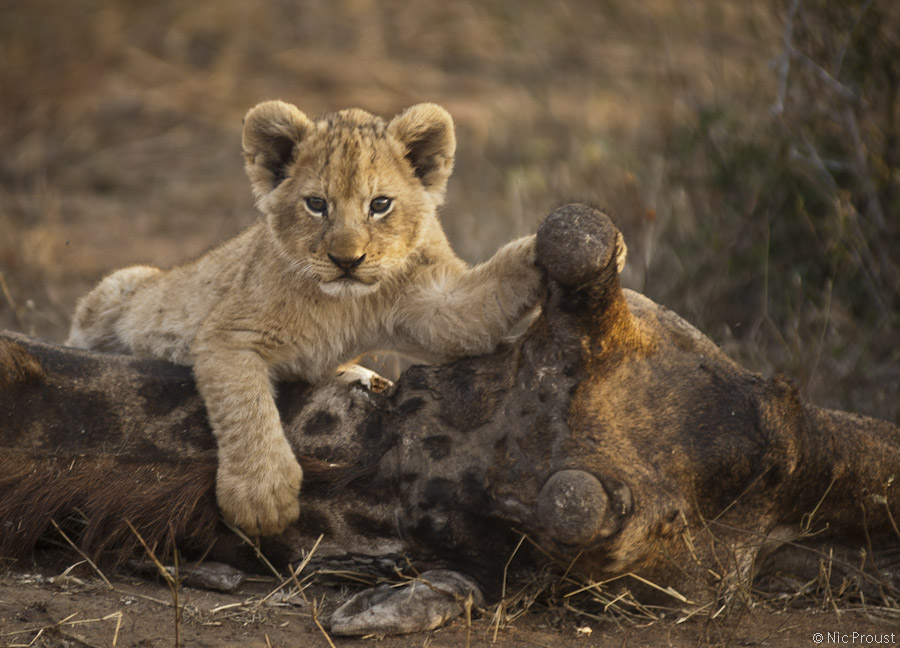 A young king! It was thrilling to watch this young male lion pose on top of a giraffe kill as if it was him that had made it! The rest of the pride killed this giraffe some days before and we watched for about a week as the 9 cubs had the best time playing around the kill. 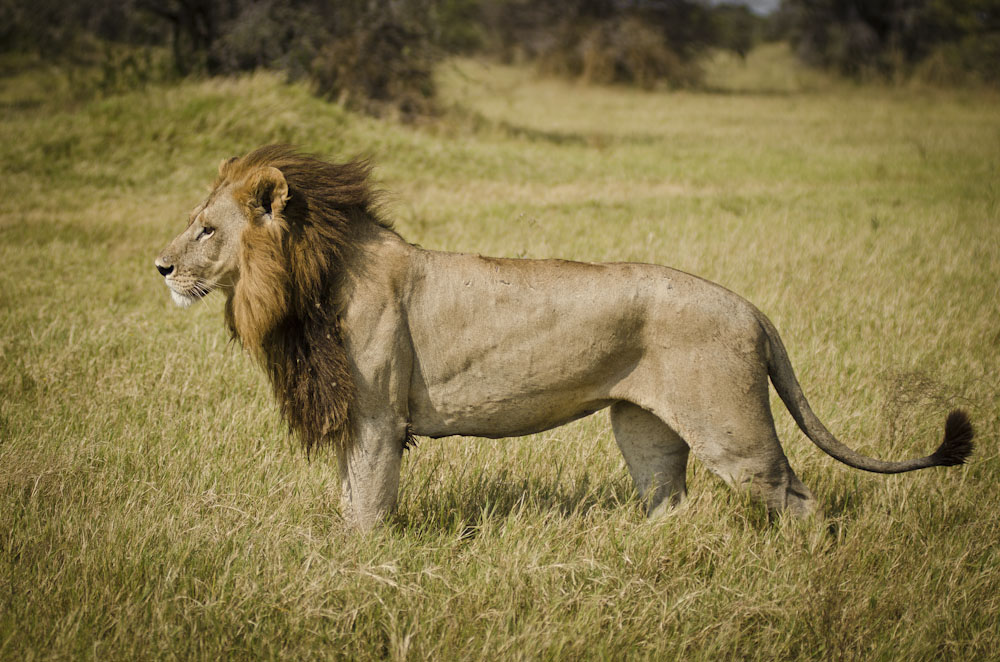 This is a female lion!! Amazingly in the Okavango we have a few maned lions that make an appearance from time to time…this one we called Mma Moriri which is translated to the hairy female. Sadly she is not alive any more but she provided us with amazing entertainment over the years as she would lead her pride into battle, or be a killing machine or simply show great affection to the pride’s cubs! 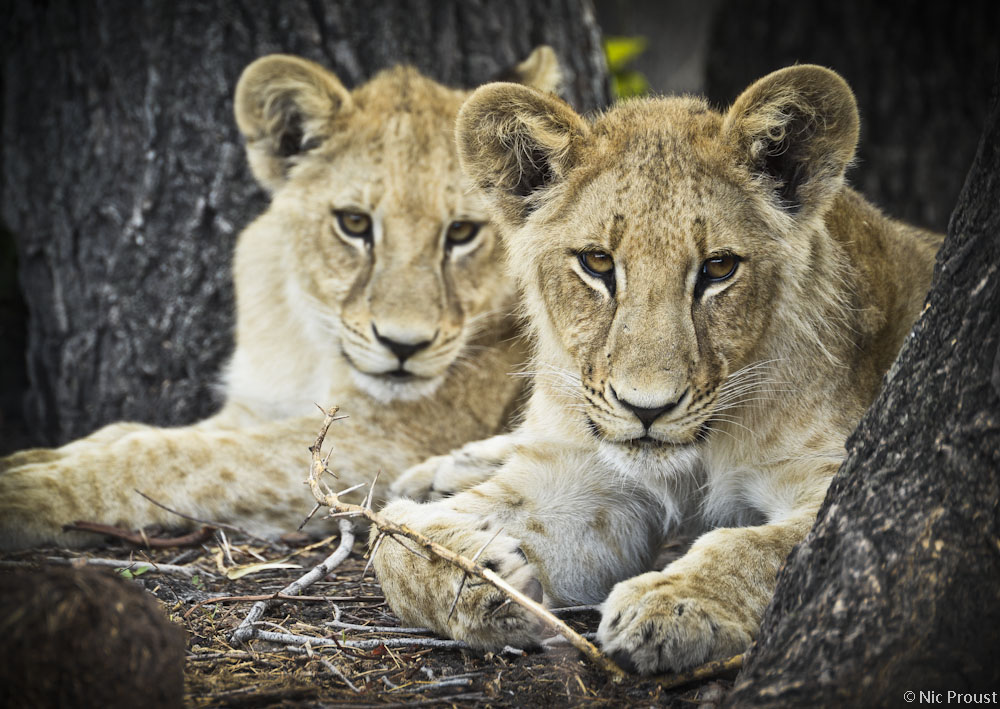 Two young cubs from the Moporota Pride give me a stare down. This pride resides close to Mombo camp and has provided us with so much entertainment over the years! 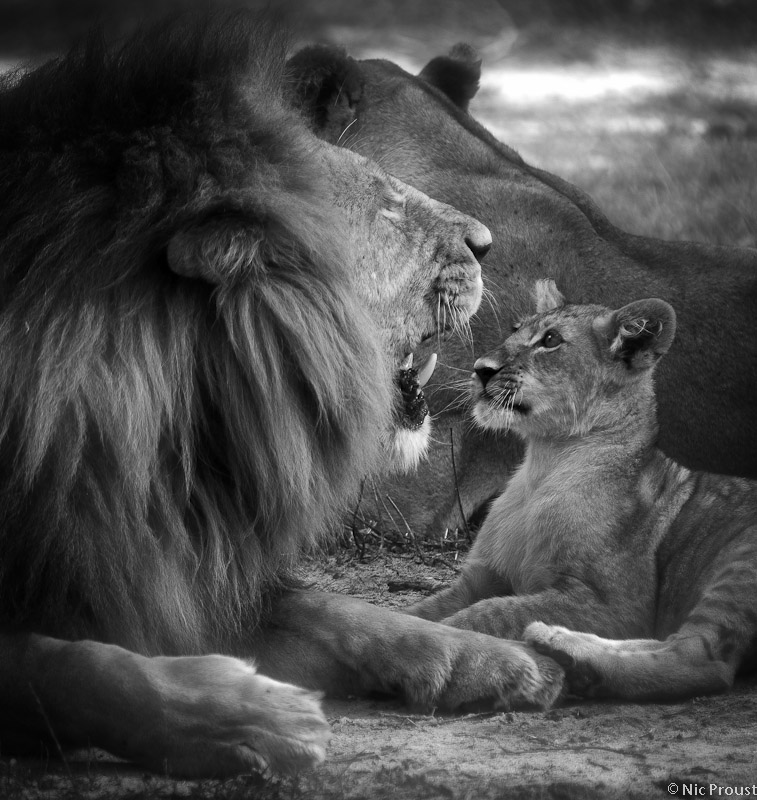 This Black and White shot was taken at Mombo and is of one of the Western Pride Males that reside close to the Piajio area. It is from the same series where the young cub was risking life as he teased his dad. The shot did well in a competition and got a highly commended award. 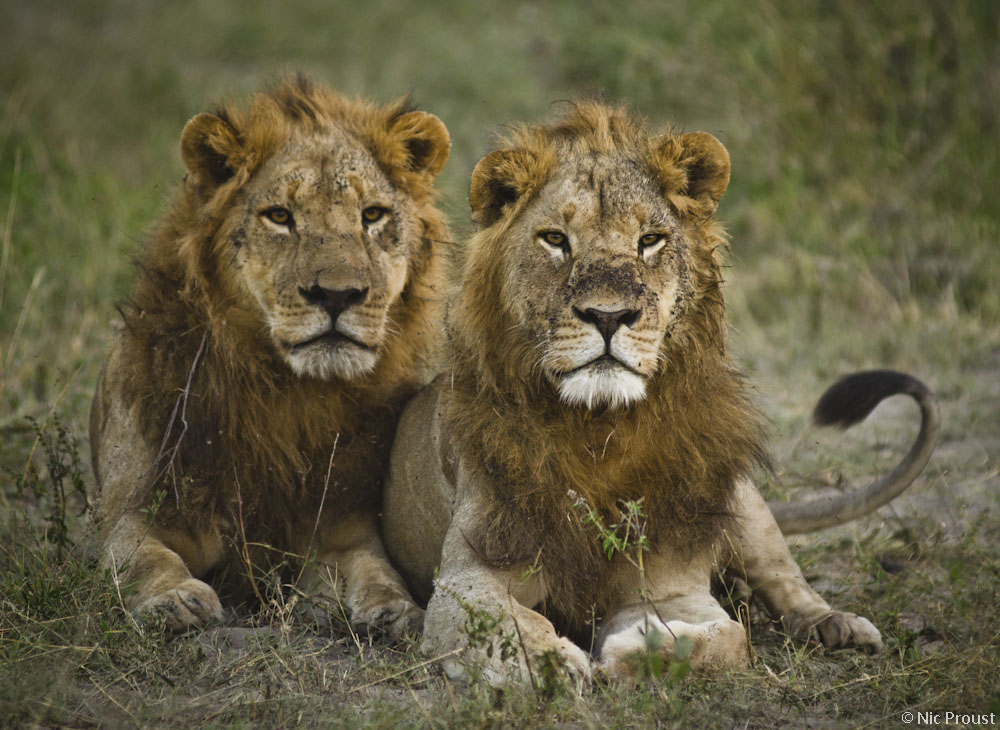 Two male lions rest near a hippo carcass that they were feeding on…this was in the Linyanti and is an area where lions experience a lot of pressure from the development in the former Caprivi Strip. They often get shot or poisoned when they get too close to livestock areas. There is also hunting to the north and these two would no doubt make nice trophies in a rich man’s lounge and as he shows his friends how tough he….the reality is that many hunters end up hunting these majestic creatures from a vehicle…

Lions and hyenas fight over the remains of a dead young elephant that was attacked by the hyenas the night before..it succumbed to its injuries before the lions came into the area and got the kill before the hyenas fought back..tune in for some good action and incredible audio! 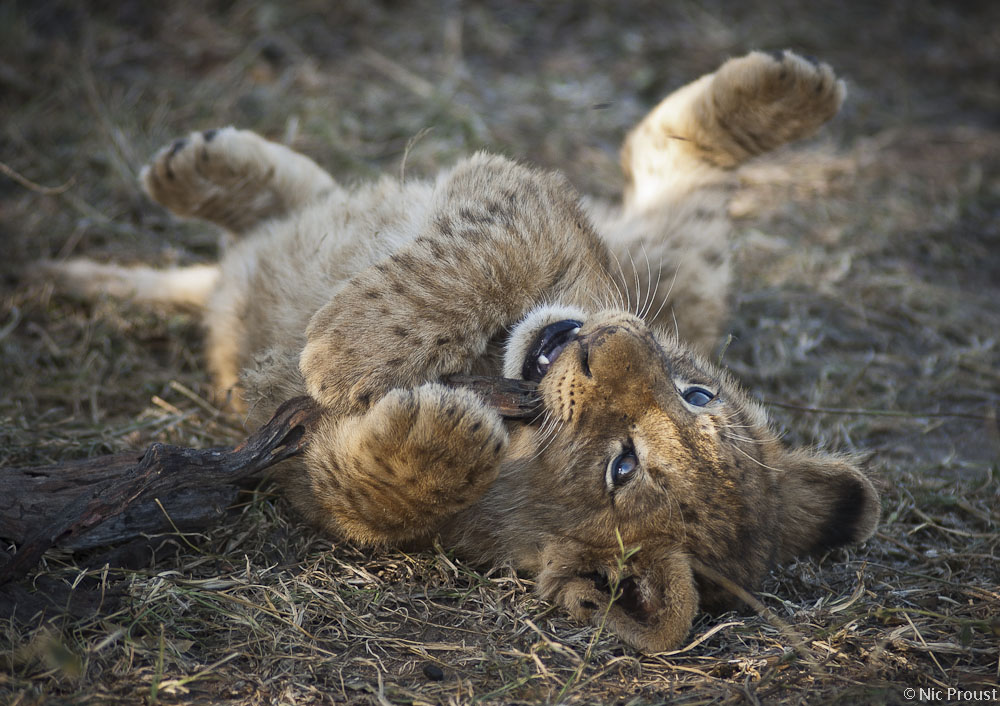 A young lion cub plays with a piece of stick…this play is instrumental in developing strength needed for later in life and it was a pleasure to watch the cubs of this pride grow up! 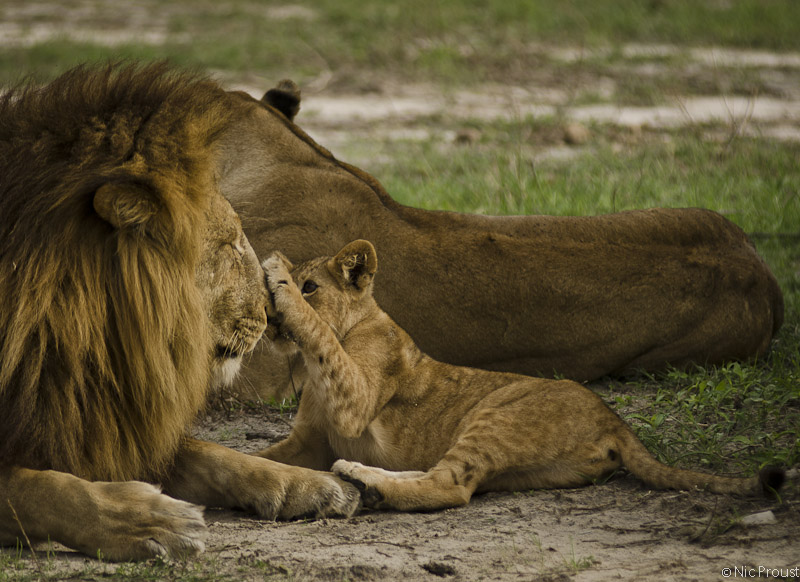 In lion cub society this is about the worst thing you can do…a young cub cheekily paws his dad! In this instance the naughty little one got away with murder however there are records where males have taken such exception to this kind of behavior that they have ended up even killing cubs! 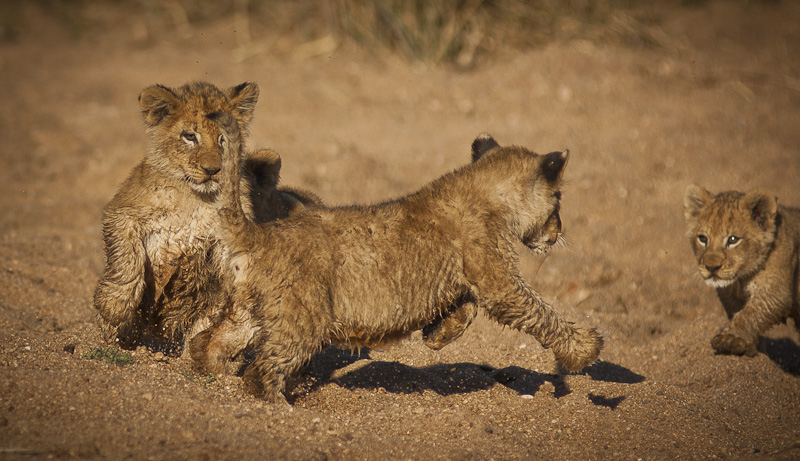 These lion cubs were part of the Eyrefield pride that I had the privilege of watching grown up when I guided in South Africa’s Mala Mala Game Reserve! 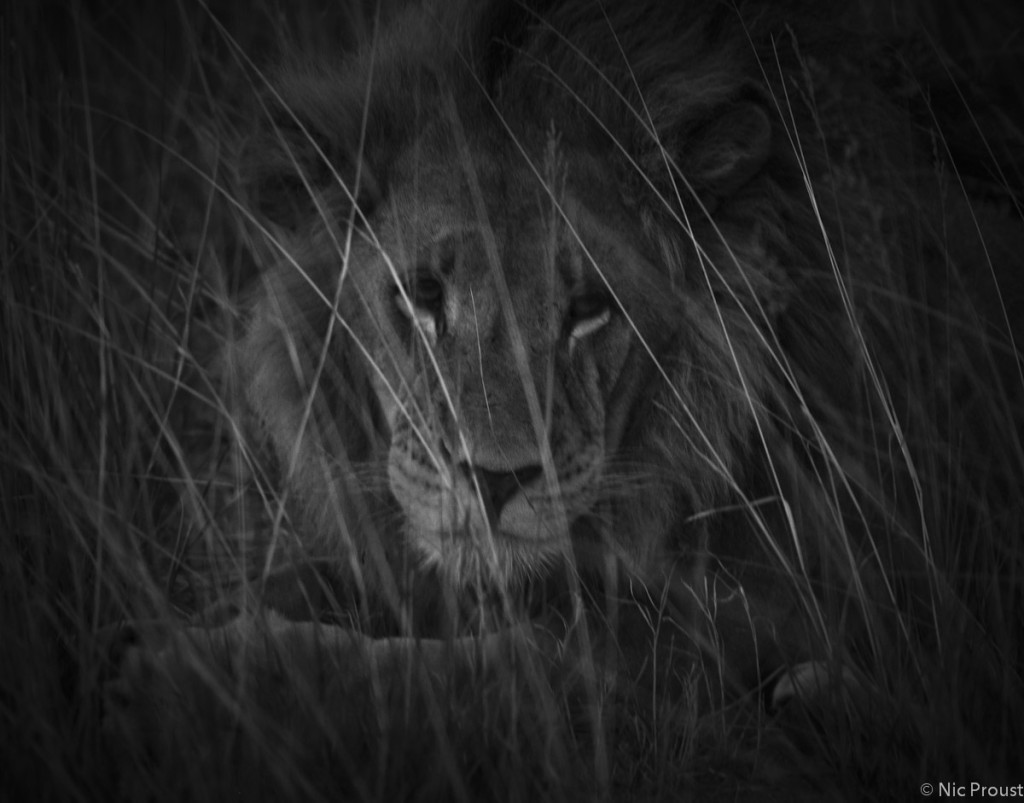 A bit more of an abstract shot, this is one of a coalition of 3 male lions that have a huge territory in the western Okavango. Due to human wildlife conflict in the area, many lions are killed and the one lion researcher in that part of the Okavango collared 9 lions – before the end of her study 5 had already been killed by cattle farmers… 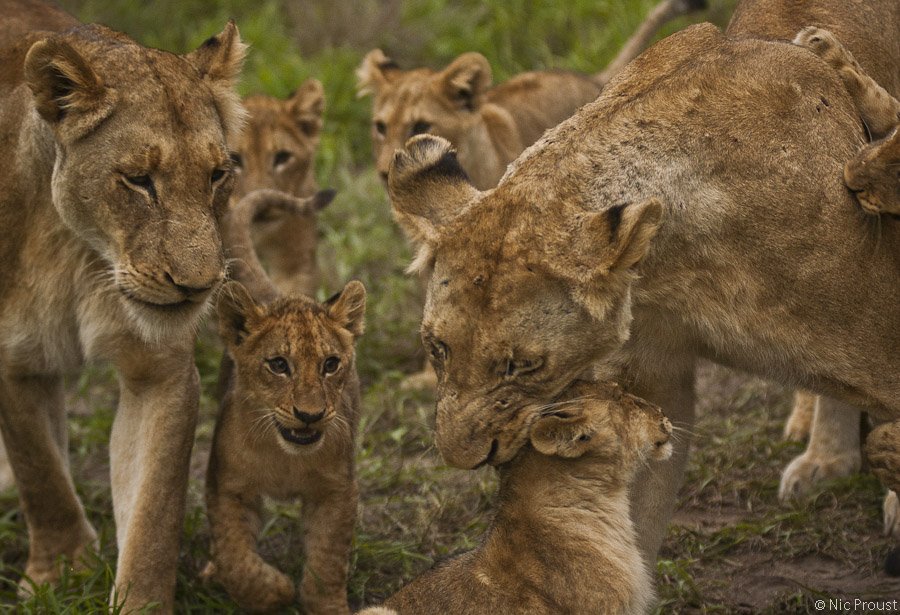 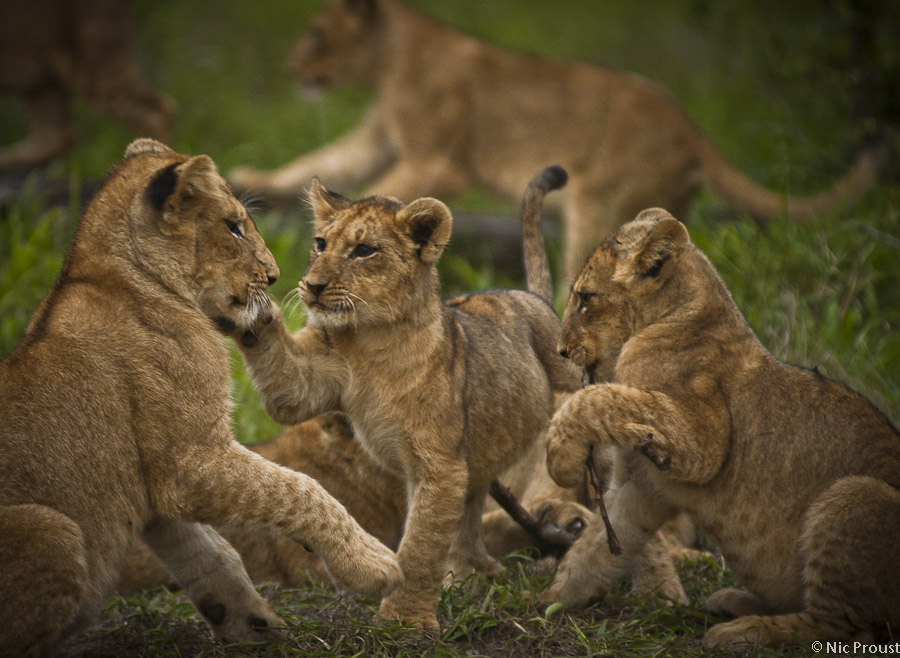 The two images above depict just how amazingly social lions can be…we watched this pride for hours on this day and they were simply just a thrill to watch! 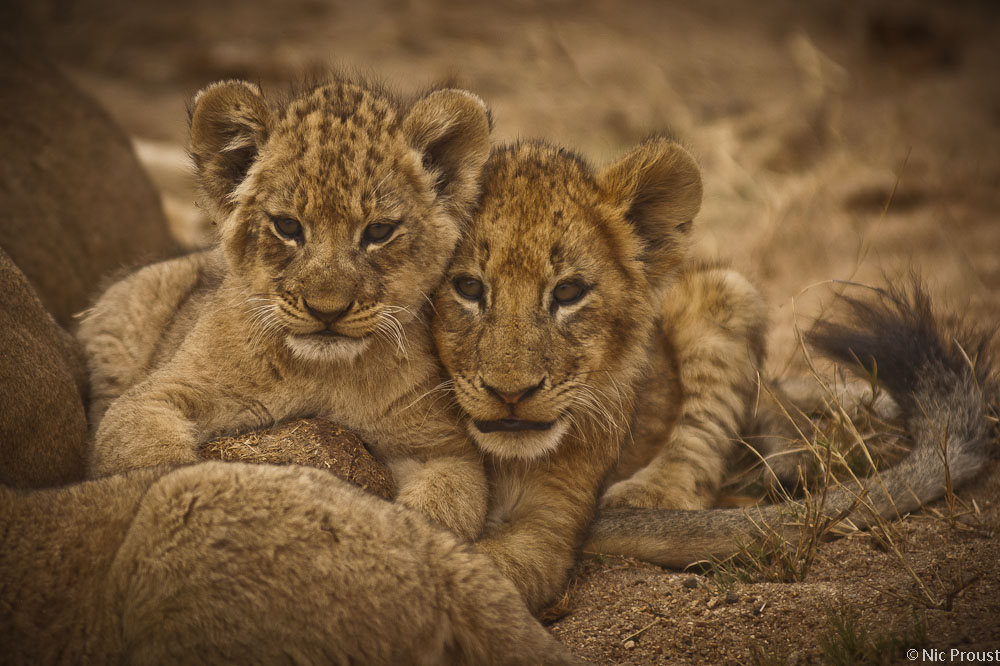 The bond formed between lion cubs when they grow up will last them a life time especially if they are from the same sex. These two cubs were from different litters and were inseparable during this sighting allowing for many photographic opportunities! 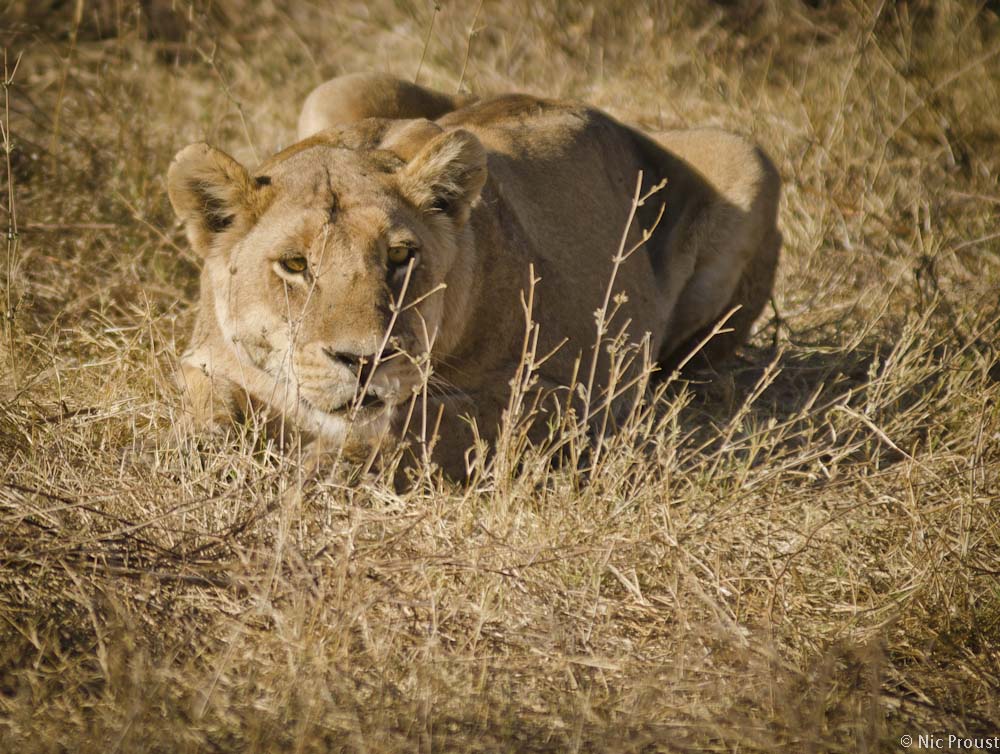 This looks like an average lion shot and is but for me it is special…I took this shot on foot…3 of us went to chase off some lions that were right in the middle of Mombo camp. GM Graham Simmonds, lion researcher Simon Dures and myself teamed up and clapped hands and bashed things to chase them off…of the 12 lions, 10 moved off quickly but 2 stayed behind including this female who just decided to stalk us…it was quite a hair raising moment!! 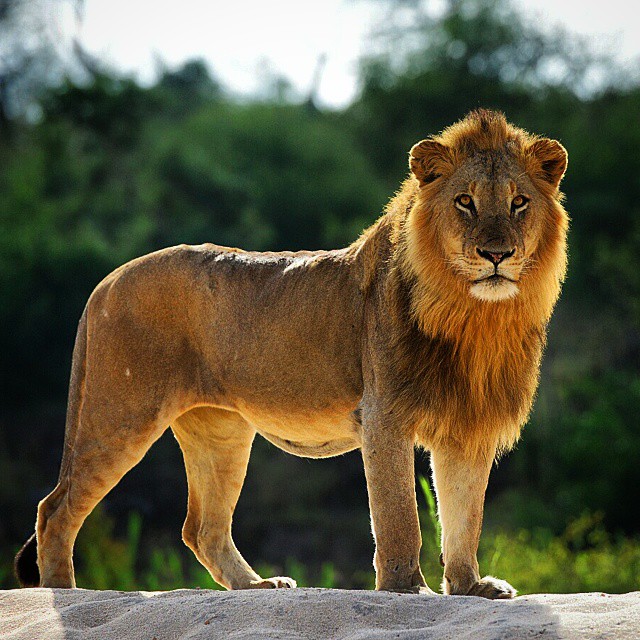 This shot was taken by Jacques Proust at Mala Mala

Lions are incredible animals that need our help. We have been responsible for wiping out much of their former range across Africa and India…Africa’s lion population is often reported at around the 20 000 figure. They are not facing extinction as so many conservationists will tell you but they are under threat in the wild and while there will always be lions in captivity or small private game reserves, the idea is to protect lions so that they can thrive as they always have….living wild and letting nature determine their fate, not mankind!!