A young white rhino calf splits away from its mother, looking out towards us and giving one much hope that this species has a chance of survival in the wild…

The second image (below) shows the current status of part of the fence separating Kruger with Mozambique – amazing how serious the war has become out here! 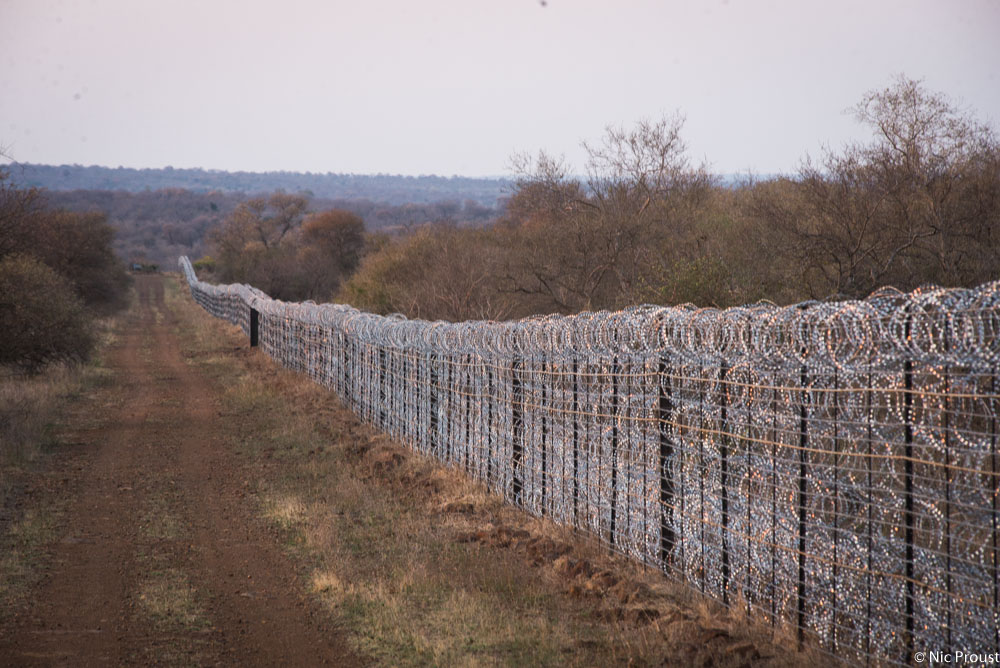 What a mixed bag of emotions it was returning to areas in and around the Kruger National Park over the last couple of months. After a 7 year absence from a place I knew so well, upon returning, the massive visual decline in rhino numbers is what hit me most. In fact I have a hard time believing current numbers are as high as claimed.

The stronghold of this huge tract of land still have good rhino viewing and plenty of signs but it is in the middle of the Kruger and up north that things were the most depressing. Just a decade ago, you could drive around Satara and see so many rhinos and freshly used middens every day. But now, apart from the odd sighting and relatively minimal evidence, there are much fewer rhino around. No scientific experiments needed, just plain and obvious for those to see who know the area well.

I asked around though and speaking to many guides, conservationists and anyone who loves wildlife the tune was the same. A former section ranger had had at least 70 rhinos disappear during his time there. This man used to shout the loudest and blame others for rhino poaching until he was caught with a rhino horn himself. What is most disturbing about the story is that while he was moved to an area of fewer rhinos, he is still working in the park!! While you need to be convicted to be proven guilty, there is one obvious thing in Kruger. A lot of the poaching comes from within!

At the same time it was amazing to see the efforts of such good people doing great work. This section of fence has been heavily reinforced and it is clear that this war is being fought full on to prevent poacher incursions from the east. There is a lot of evidence of increased security and the guys are really tracking down the poachers and giving them little time to operate.

Furthermore to the east of Kruger there is a lot of exciting news going on. Singita boss, Luke Bailes has purchased a huge section of land in Mozambique, an area of over 150 000 hactares. Initially it will help by aiding to buffer part of Kruger’s eastern border (south of the Olifants river) and hopefully some day it will become a prime game viewing destination!