We put the camera traps at rhino dung middens and will be focussing on this species even more as we continue to do important rhino monitoring work. The images on the following page show some rhino monitoring photos we have captured so far: 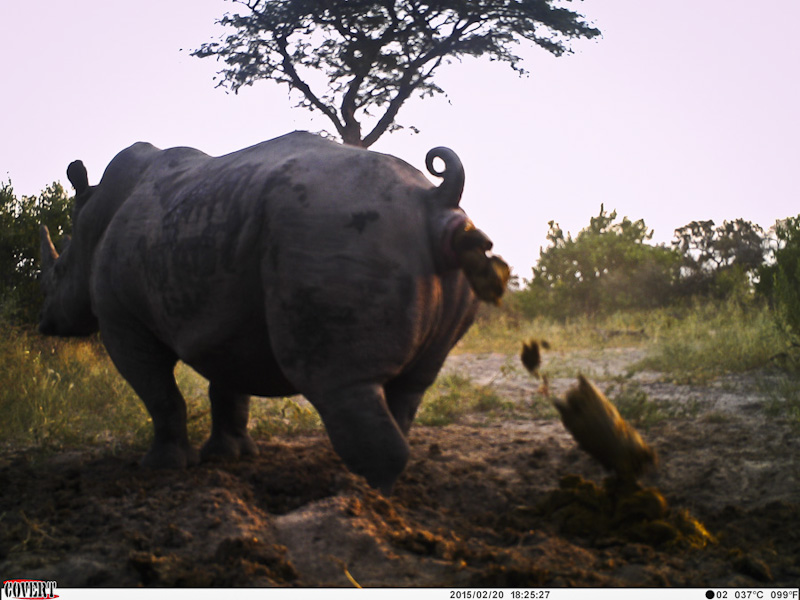 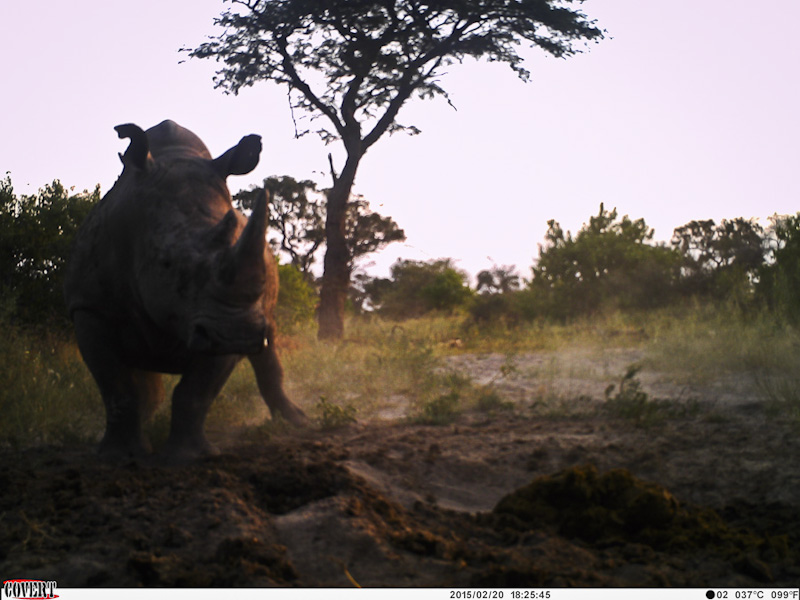 This Bull is known to us as he has distinctive features. This information has allowed us to understand better his territory, times of activity as well as which other rhinos and species visit his midden. These sort of findings are extremely valuable in monitoring this endangered species.

Following reports over the years and seeing it for ourselves that the big cats like to use man-made bridges to traverse water courses we put a camera trap out on one of 3 bridges that cross the well-known Savuti Channel. This was done right at the peak of summer and the camera trap was left out for just over 2 weeks and checked regularly. At this time of year big cat viewing becomes a lot more tricky for a few reasons. We were amazed at the regularity with which the big cats were crossing the Savuti Channel and how often they would cross over just a few minutes after one had set up the camera.

Have a look at two edited images below: 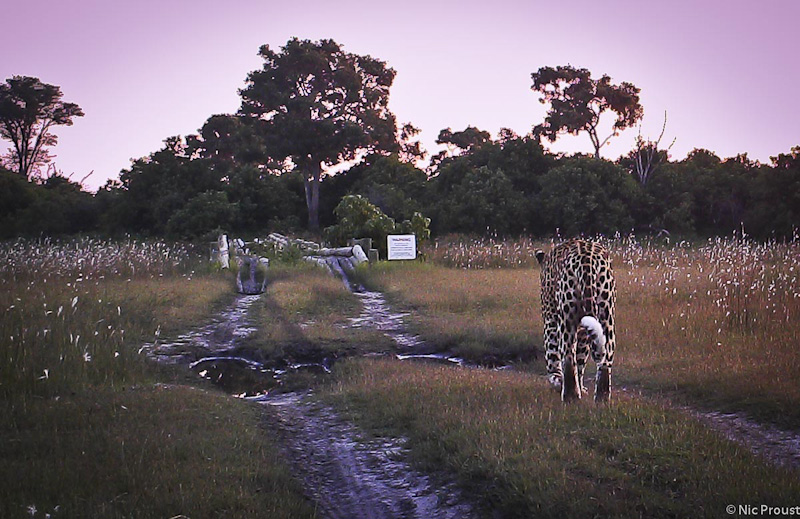 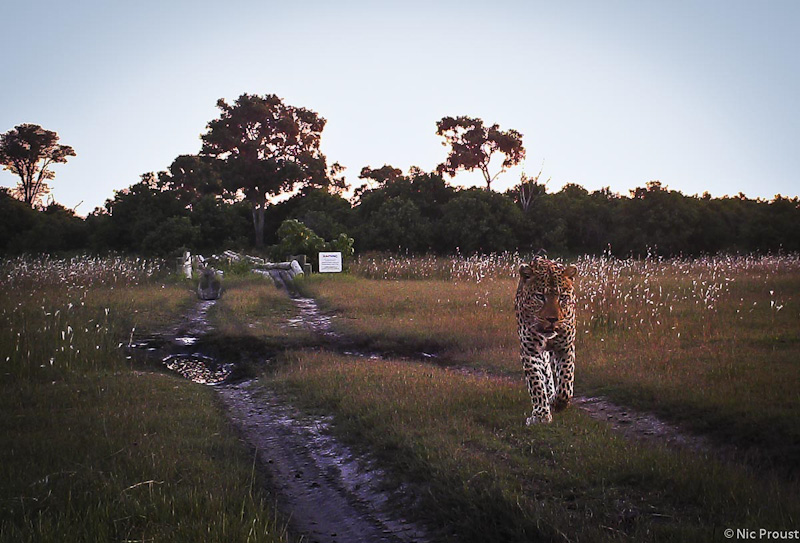 Male Leopard crossing back north over the bridge 2 days later!

One week later on the way to retrieve the camera we found some mating leopards close to camp. I could see from the tracks that the leopards had come from the South. The female leopard was totally new to the guides and not yet forming part of our leopard identikit. When we went to fetch the camera about 10km from where we had seen the pair, we found that the female leopard had come from out of the main game drive area, again showing us how often female leopards will move out of their territory to mate with a selected male. 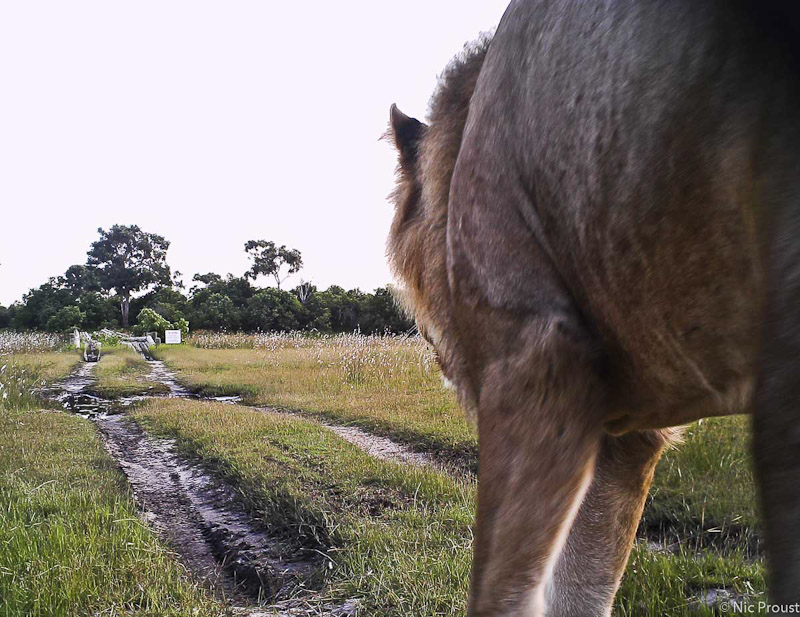 Some other good findings in the Linyanti

We took a ‘printscreen’ of two videos of elephants making their way across a prominent dried floodplain to water. 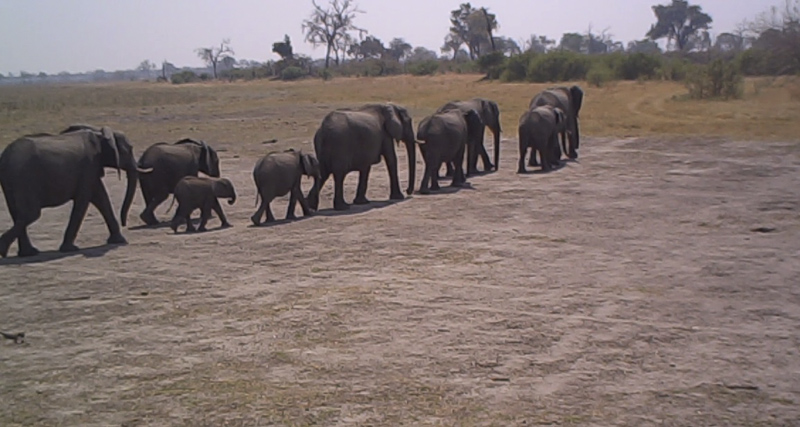 Elephant herd on the way to water 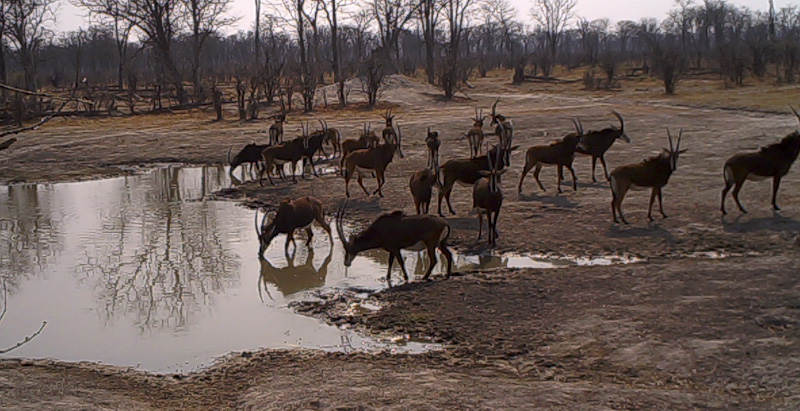 Sable are fairly elusive in the Linyanti concession and there is no better way to monitor this species than through camera trap monitoring. Although this pan is quite close to camp they often wait until there is no sign of humans before coming down to drink – this image shows the type of sighting we often miss!

While on our way to a camera trap location, a few guide trainers were with 2 members of the environmental department, when we came across some Ground Hornbills. This species conservation status is listed as vulnerable on the IUCN red data list.

While still fairly common in protected areas, they have seen large declines outside of these areas and so when we realized that these two birds were nesting (on dead tree on top left of the image), we set up the camera trap to monitor their behaviour. From our findings we saw a large reptile being ‘fed’ to the nest and noted that they visited the nest at least about 3 times a day. The records have been submitted to Birdlife Botswana to assist in some interesting findings of a not so often seen nesting record. 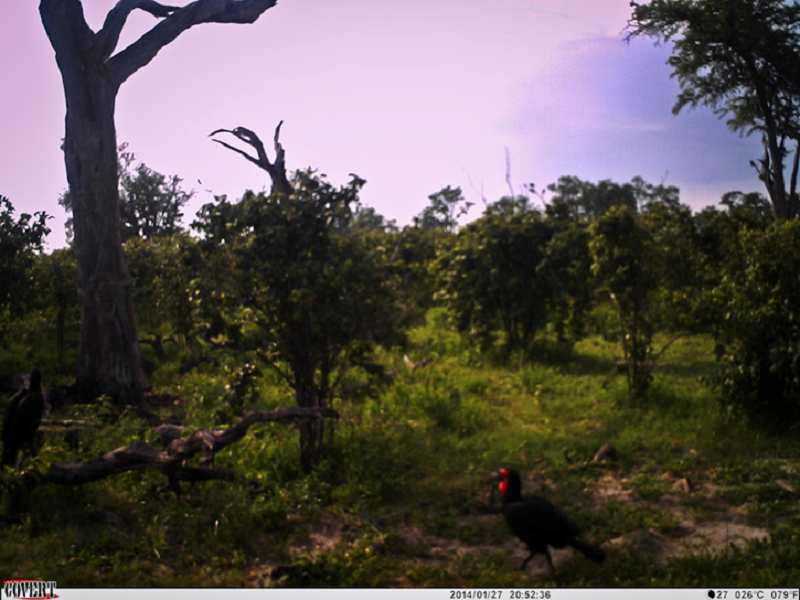 The Central Kalahari Game Reserve is officially the second largest in Africa and forms part of one of the largest tracts of wild land left in Africa. This area is poorly studied and so we have set up one of the cameras for a few days at watering point close to camp. We were incredibly excited with the findings, especially at night, showing the constant queue of predators to this area that are so rarely seen in the area during the day. 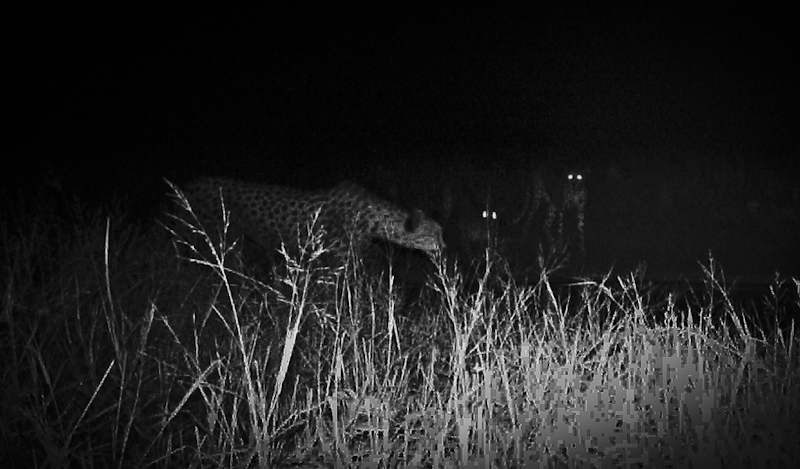 3 Cheetah caught by the camera trap drinking at night! 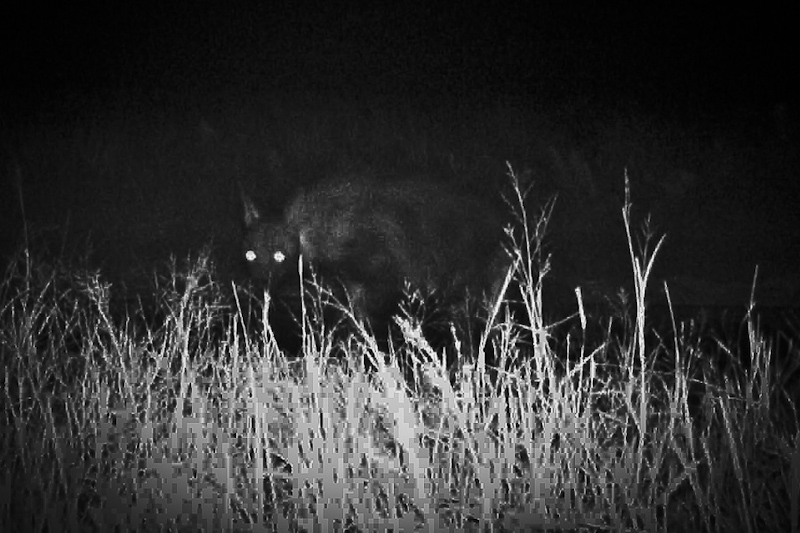 Although we see their tracks, the camera records a rare glimpse of a Brown Hyena!

During the day we had plenty of sightings and this water point is great for stork and vulture viewing. We are aiming to set up the camera more permanently at this location to record vultures that come down to drink. Most of Africa’s vulture species have come under threat from poisoning events and they love this water point. We work closely with the researchers from Raptor Conservation Botswana and will be sending them pictures of their tagged birds should any pitch up at the waterhole. 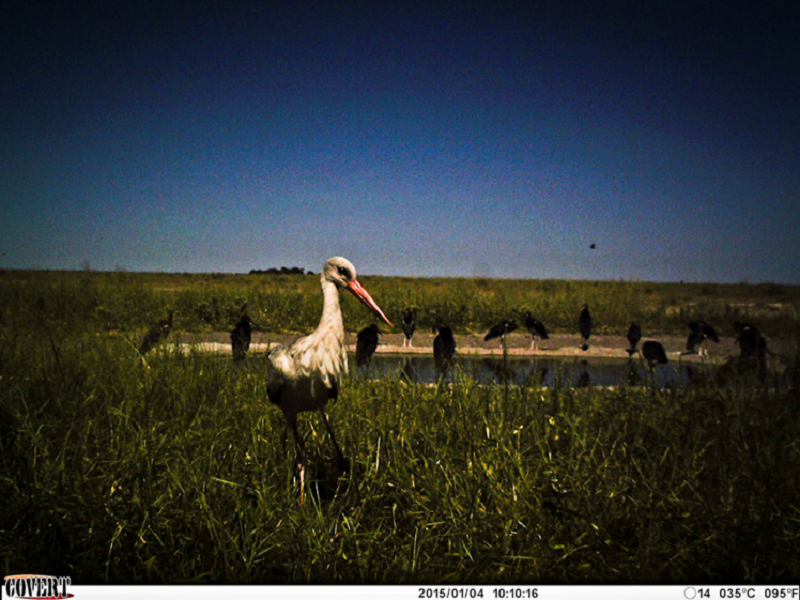 A summer visitor, a European White Stork poses nicely in front of the camera 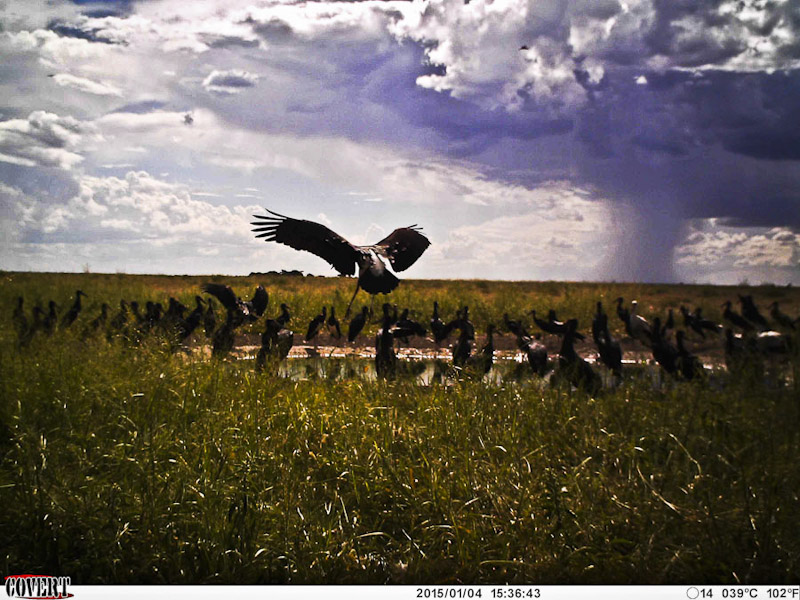 Abdim’s storks gather in big numbers during the summer months

Currently we have 3 cameras in operation and will shortly have all 5 in use again in the near future. I am also starting up a species list of animals recorded by these cameras. We have had a lot of other interesting findings and will continue to use them widely with a main focus on rhino work.