We have just recorded a new bird species at Chitabe camp in the Okavango!!! “What bird is that?” …someone asks! As I go over the lists of all the birds recorded across the Okavango Wilderness Safaris camps on 31 March 2016, on one list there is a species of bird that really catches the eye… 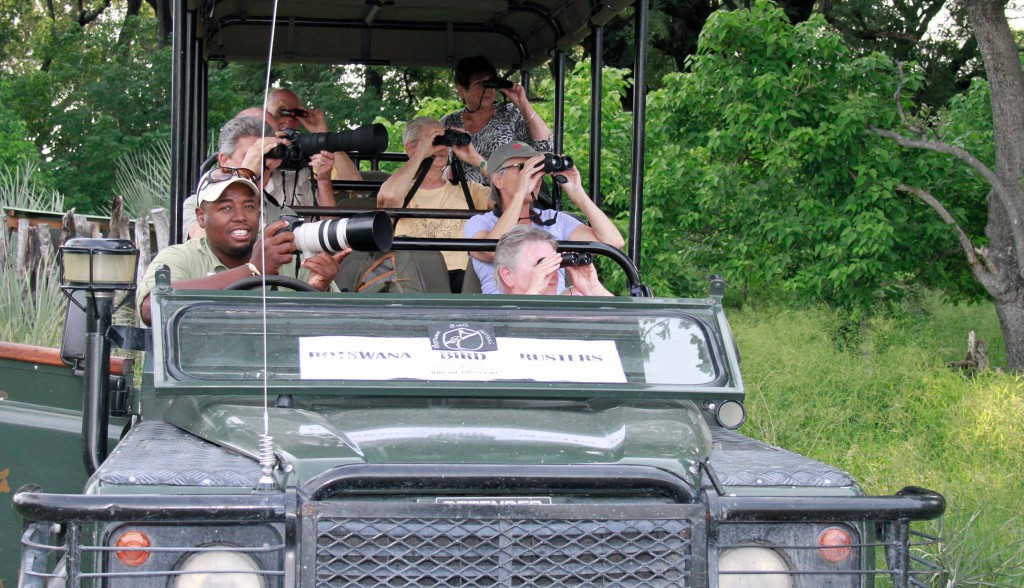 Our winning guest team: Thuto and his guests…”if you need a count and it’s all about the amount…who you gonna call?? BOTSWANA BIRD BUSTERS !!”

Okavango Wilderness Safaris has just had a bird competition where all guests and staff were invited to take part in this fun event. In total 19 teams across the various camps and concessions decided to have a day out where the focus was on counting our feathered friends. With Wilderness Safaris having started out as a birding safari company back in the eighties, it made sense to once again have a day where we could focus on appreciating the beauty and diversity of all the birds around us, so we cleaned our binos and dusted off our bird books and had a thoroughly enjoyable day out! On top of this we contacted Birdlife Botswana and they were eager to get involved with our competition realising that we could provide some good findings.

The competition started at 5am and ended at 11pm and some diehard teams birded the whole day, barely stopping for food or water and continued into the dark hours hoping to find some of the owls and nightjars we regularly see in all our camps. Teams operated out of the Linyanti, Mombo, Xigera, Abu, Chitabe, Vumbura and Kalahari Plains areas and we even had two teams from the Maun office! As a company we counted an incredible 273 bird species across all areas in this 18 hour period. This just shows how amazingly diverse the concessions are that we operate in and while for example Kalahari Plains camp only recorded 67 species, about one third of the species recorded there were not recorded anywhere else showing this is a very important destination for unique birds in Botswana! 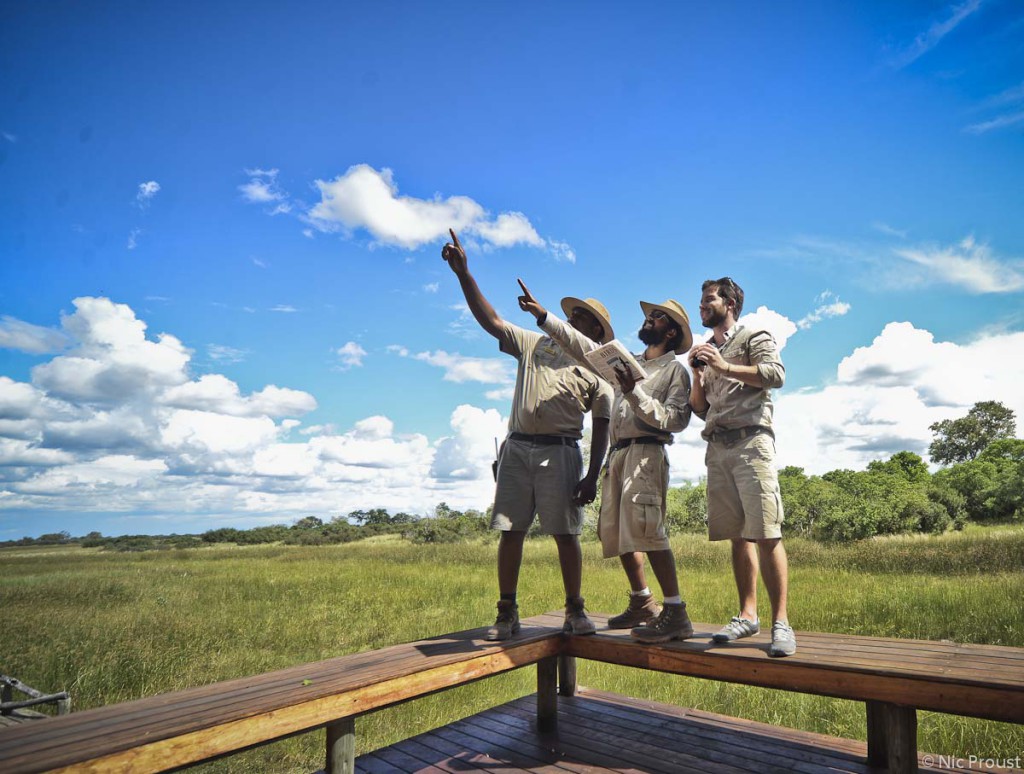 Some of the Linyanti Longclaws at Savuti camp along the dried channel… showing us how it is done!

Almost all teams recorded close to the ‘100 species mark’, a species total representing a very good day’s birding. The winning guest team was accompanied by their excellent explorations guide and host combination, namely Thuto Moutloatse and Olivia O’Reilly. They, with their 8 guests amassed 107 species in the 18 hour period and were very clever to make the most of birding in both the Vumbura and Chitabe areas on the same day. They were followed by guide BT with his 3 guests who got a great 96 species while operating out of Abu camp and showing how this part of the Okavango is very productive. The third place team was Mombo guide Sevara, who with Map Ives and their guest team did very well to get to 95 species showing that when Mombo is referred to as the place of plenty, it is not just referring to the mammal viewing! Overall 39 guests enjoyed the birding experience and it was so pleasing to hear the Biven family, who were staying at King’s Pool, saying how much they enjoyed their day in the Linyanti having not really birded before. Guide Lucky obviously did a great job in converting them! So well done Lucky…it is great to have more keen birders in this world! We also had Lex Hess a well-known guide bringing guests through and they also got into the 90’s without birding at full capacity showing off some great skill and making a great contribution to the birding done in the Linyanti that day with guides Name and Godfrey.

Management teams did very well too and first place goes to the explorations team comprised of four well known guides, namely Francis, Richard, Brooks and Alex. They did brilliantly to reach 115 species and a combination of their birding expertise and great knowledge of the Maun area showed us that Maun is an incredible destination for birding…perhaps there are no surprises here as Maun lies on the edge of the Okavango! The second placed position belonged to the “Linyanti Longclaws” who birded all the way down the Linyanti Swamp and as hard as they could. Comprised of team members Quest, Alco, Kang, Deon and Nic they got a great 110 species showing how amazing the Linyanti is; a true bird watcher’s paradise! The third placed team was Wax, Tapera, Lesh, Gideon and MP operating out of Xigera who got a fantastic 106 birds from this water camp while BB, Lesh and Jay made a great ton, birding out of Chitabe! Other management teams did fantastically too and a big thanx to fellow environmentalist Mike Fitt who, operating out of Vumbura, got a team going that side while Ona Basimane got a team going from Maun. Both of these teams scored in the 90’s. Then thanx a lot to Mombo management, Hamish and Millie and their team for doing some great spotting and scoring nicely into the 90’s too! 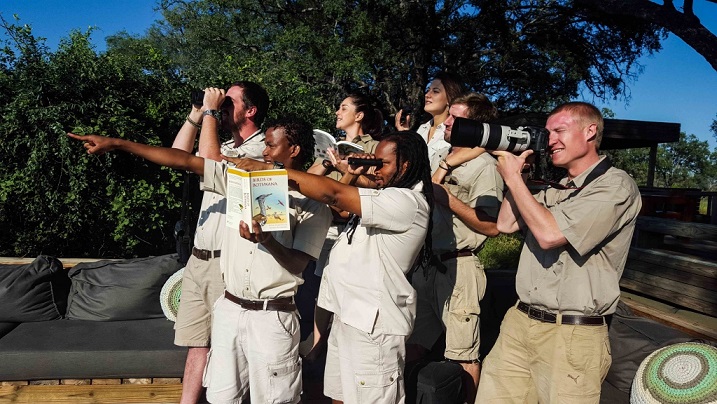 Lenses and fingers pointed… some of the Vumbura Team practising how to twitch a rarity!

We also had a lucky draw for all the staff which entered the competition and winners are Hamish Henderson from Mombo, Phenyo Tlalenyane from Vumbura, Naledi from Kalahari Plains and Lesh from Chitabe! Well done and enjoy your new Birds of Botswana book!

Of the 273 species recorded there were many highlights and we have the list of species seen readily available for those who are interested. Of note were more than 80 Kori Bustards counted from Kalahari Plain’s camp team during the allotted time. This is one of the most special and threatened species in Southern Africa so it was fantastic to have so many recorded during this day. Apparently the team just couldn’t keep up with all the Kori Bustards on display…this was probably the greatest find of the day! Raptors showed well on this day too and there was a good presence of seed-eating birds following the good rains of late and while the likes of a couple of species of cuckoo were still present, it was clear that many of the migrants were already making their way back north! Species of note that were recorded on this day were Pink-backed Pelican, Slaty Egret, Rufous bellied Heron, Wattled Crane, Lesser Jacana, Long toed Lapwing, Temminck’s Courser, Black Coucal, Swamp Nightjar, Pallid Harrier, Yellow-fronted Tinker Barbet, Lesser & Greater Honeyguides, Pearl breasted & Grey-rumped Swallows, African Golden Oriole, Rosy throated Longclaw and many others including a great representation of many of Botswana’s birds of concern, showing once again how important these large tracts of land are for species conservation.

Are you into birding? Well even if you don’t like bird watching (which is unlikely as you have reached this point in the article) we suggest you take it up because when you concentrate on the smaller things in nature, often the big things reveal themselves too. This was a case in point a few times during the big birding day where the Linyanti Longclaws managed to find 2 leopard sightings, one of which they located close to Linyanti Tented Camp after following up on some annoyed guineafowl. The Botswana Bird Busters on the other hand were birding in the Chitabe area and went to investigate a southern black tit alarm calling from a bush…and much to their surprise they found 2 cheetahs on the other side!

Proof that if you look for birds and enjoy your birding, you will find so much more!

As I write this, I have to amend the total, from 273 species seen across our concessions to 272…the reason…well we have just realised that a white-bellied cessna is in fact rather a species of aeroplane and thus does not count on this list!! Thanks to guide Ebs from Chitabe camp for including it on your list and giving us a good laugh!!