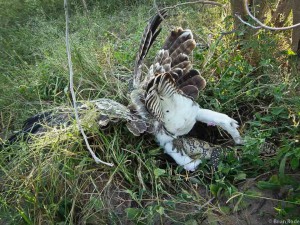 Yesterday has to go down as one of the weirdest coincidences I can remember! A few hours after posting a Martial Eagle pic with a warthog kill on this page, we were out on drive in the Linyanti trying to get photos of some Redheaed or Cardinal Queleas that had been sighted a week before. Anyway we got stuck in some soft sand and as we were digging ourselves out we heard a big crash next to us…we quickly swung around assuming it was an elephant sneaking up on us only to find a juvenile Martial Eagle had just caught a huge Nile Monitor right next to our car…the crazy thing about the sighting was that it was a stale mate…the eagle had the monitor and the monitor had the eagle pinned to the ground. After about 5 minutes they both gave way and the monitor took refuge in an open burrow. We then had a somewhat injured and bewildered Martial for more than an hour walking right up to us looking for his catch that got away…it eventually got dark and the Martial was still in the area…would be interesting to see what happened this morning, but one thing for sure is the Martial was not giving up! 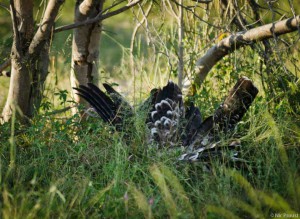 17:42 we heard this massive crash! It felt like ages that the Martial was stuck in this position…we were thinking…is it dead?

There was this stale mate here as the Martial had the monitor but the monitor, using its tale, had the inexperienced bird pinned to the ground face down (see top pic) ! 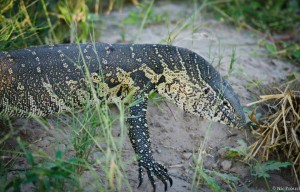 Eventually after maybe 5 minutes the stale mate is over and the eagle gets away and the monitor moves down into a shallow burrow. 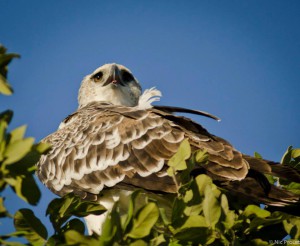 The eagle flew into a Kalahari appleleaf a few metres away from us allowing us to snap away. It wasn’t at all nervous and ignored us. Maybe because it was slightly in shock. 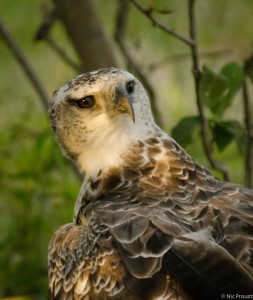 After a few minutes we had this Martial running around us like a chicken on a sidewalk in Maun and posing nicely for photos. He was not scared and approached us within a few metres. This posing continued for more than an hour until after sunset. The eagle was doing its best to relocate the lizard but to no avail!

Then the next day guides were in the area and the Martial was still there…whether it had caught the lizard again or not we can’t say but it definitely was playing the waiting game to try and catch its hard fought meal!