A Tribute to the Bike – a legend of a leopard!

Home/Uncategorized/A Tribute to the Bike – a legend of a leopard!
Previous Next

It’s sad to say good bye to the Bicycle Crossing male who died yesterday at the incredible age of more than 15. A great life for a wild male leopard! He was found with bite marks on his back and unable to move off. His time had come, but his memories will live on!

Thousands of people had the privilege of seeing one of the most relaxed and famous leopards the world has known and while it is sad, it is amazing to see how such an animal can thrive at the heart of a tourism operation – another reminder of why photographic tourism is the most sustainable and desired land use form across our savannas!

What is in the name? Although we loved to call this leopard the ‘Bike’ for short his name comes after an area of the Sand River which was shallower and a place that a bicycle could cross hence the name “Bicycle Crossing”. It was to the north of Mala Mala main camp and as we got to know his personality he affectionately got the name ‘The Bike”!

Scroll through the images to see some moments in this amazing cat’s life. It was a pleasure to work as a guide, seeing his movements and activities and getting an in-depth insight of what a male leopards life is like in the greater Kruger National Park! 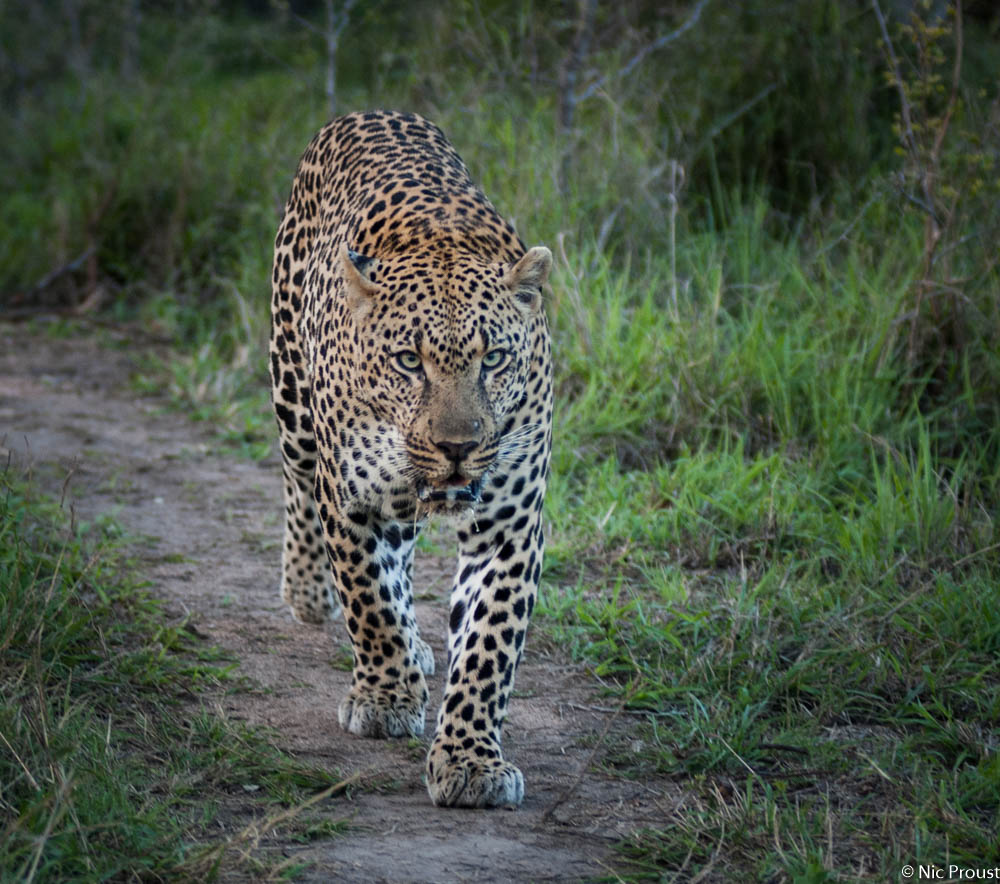 Image 1: This was my last drive at Mala Mala and one of my best. I had left early and proceeded down towards the West Street bridge area, slowly taking in the amazing wildlife on display after the first summer rains. I then back tracked north along the western bank after hearing a territorial call of a male leopard. We found him and he was very active and I will never forget this moment as he walked straight towards my vehicle, keeping an eye on proceedings like only a leopard can! You can see the saliva build-up after he had been announcing his presence and attempting to ward off other males that were venturing close to this prime area. The bridge itself belong to this big boy but literally just to the east was a meeting point of 3 big male leopards and they would walk shoulder to shoulder and very rarely cross the line, having fairly regular stand-offs. I remember on one occasion when he had a fight with the Newington Male and at the same time 2 females were in attendance and he was mating with both. 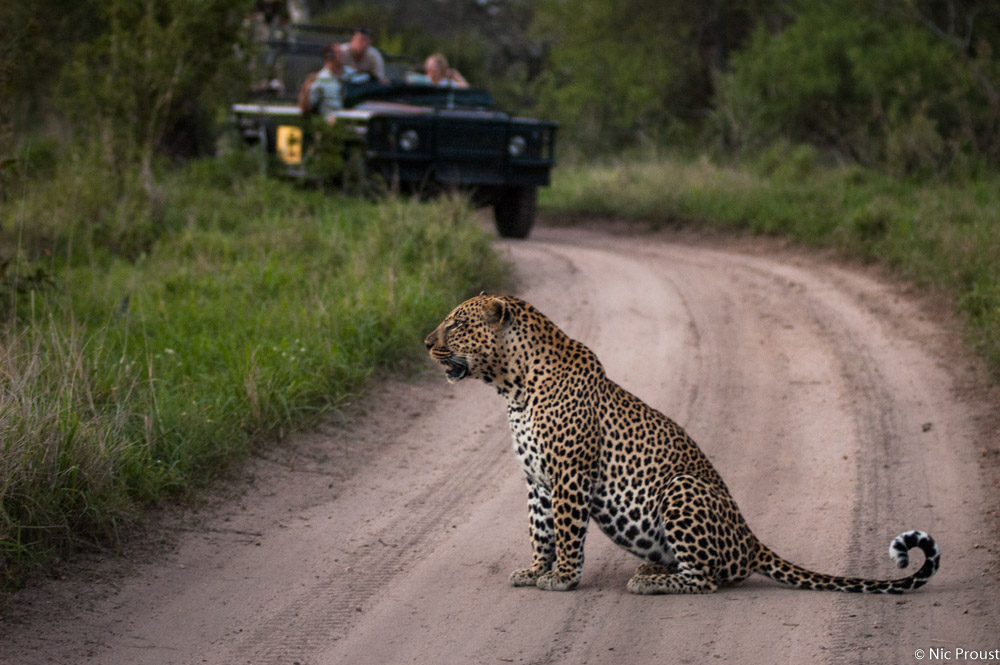 Image 2: Safari life….nothing like the feeling of coming around the corner to find a leopard in the road…this other vehicle approached and switched off. Just a few minutes after the previous shot was taken and he was eying out a bushbuck in the grass. There was no time to shoot….or at least I was too slow, when the next minute he jumped in and almost caught the unsuspecting antelope! 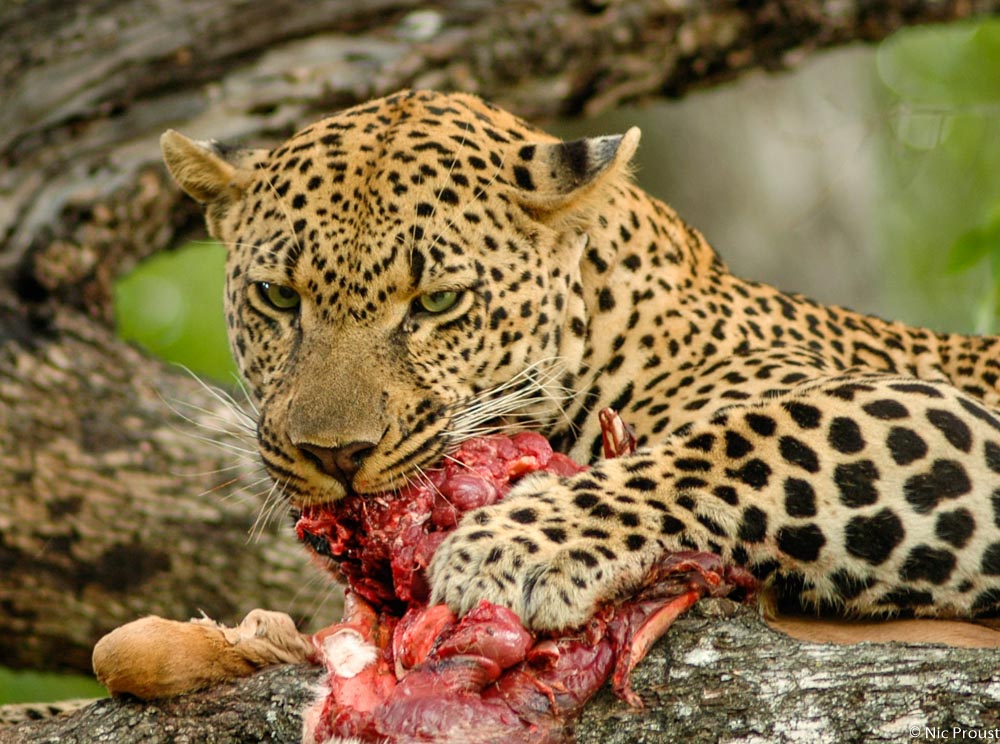 Image 3: This male was the KING of stealing kills away from females and I reckon he acquired by far the most of his food from just patrolling his territory and seeing what the females had caught. BUT when he did kill it was mostly spectacular and on one occasion he was hunting a buffalo from a herd and managed to catch a calf at night. He ran off with the live animal and was intercepted by the Eyrefield pride. We thought he had been killed! Luckily though the 13 lions focussed on the meat and he somehow escaped with his life that night to live out another incredible 8 years! 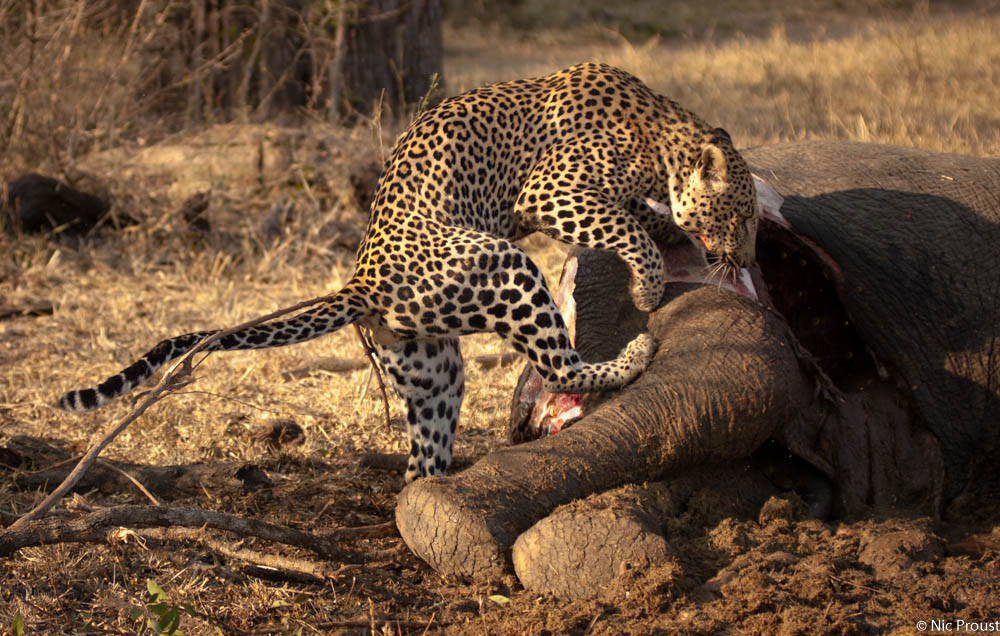 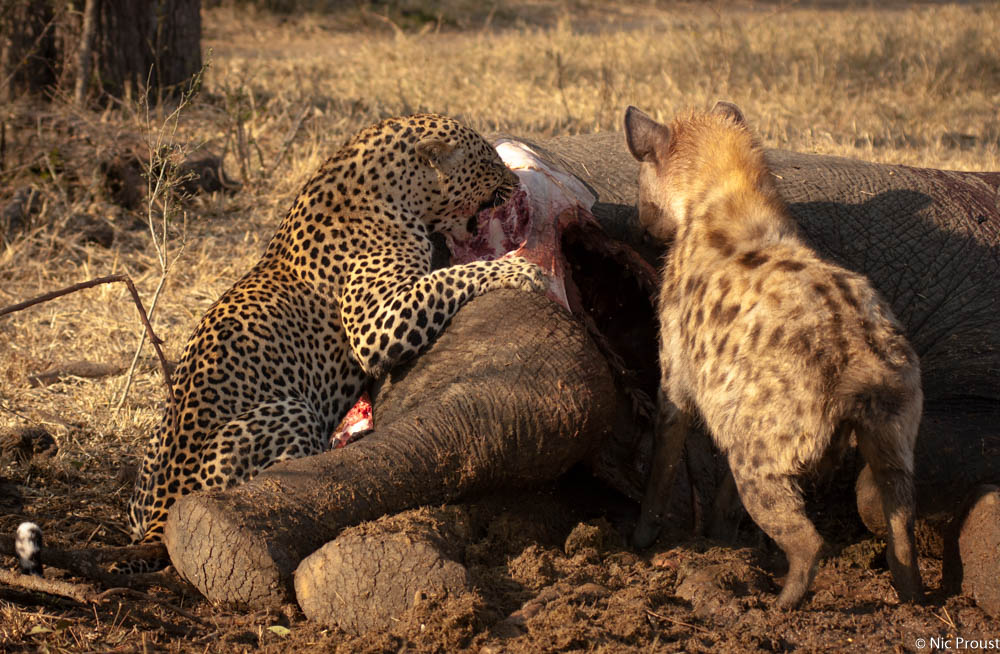 Images 4 & 5: This dead elephant provided incredible predator interaction and once again the Bike was up to his opportunisitic ways. First the Bike found it and fought off a couple of hyenas. It was so big that they rather shared it! Then a pride of 15 lions came in and killed a hyena and had the lion’s share of the meat! I love the way in the first image he pulls at the carcass. 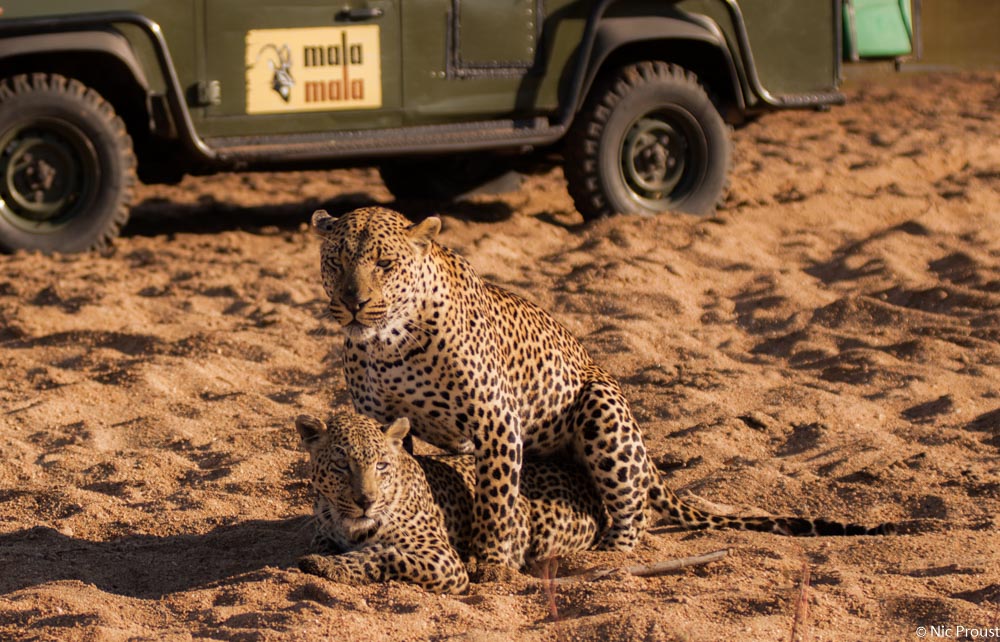 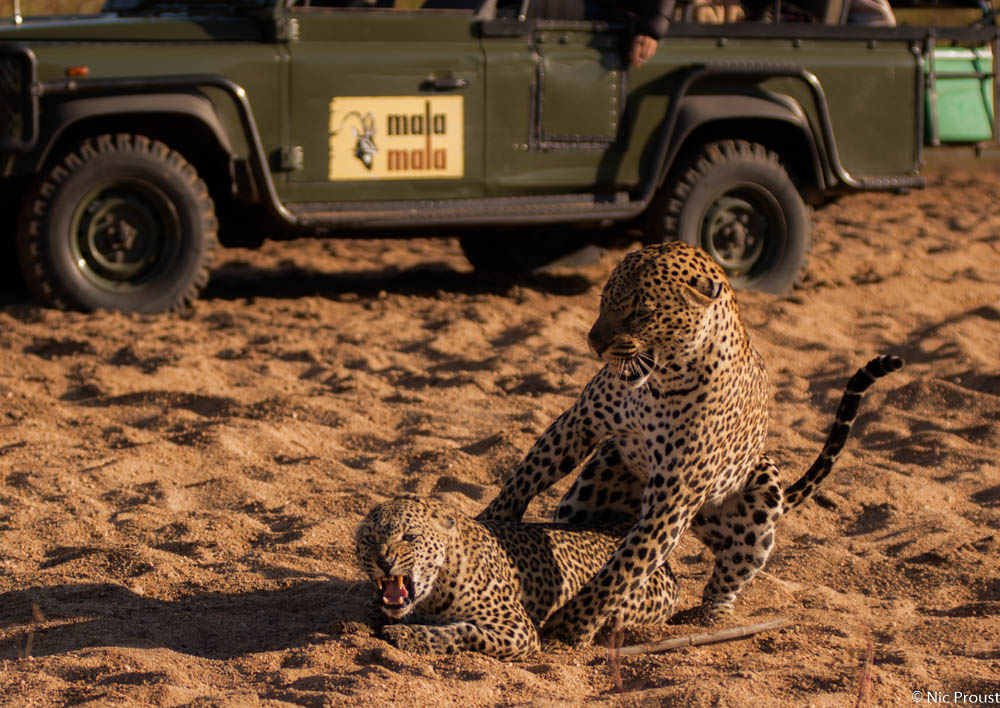 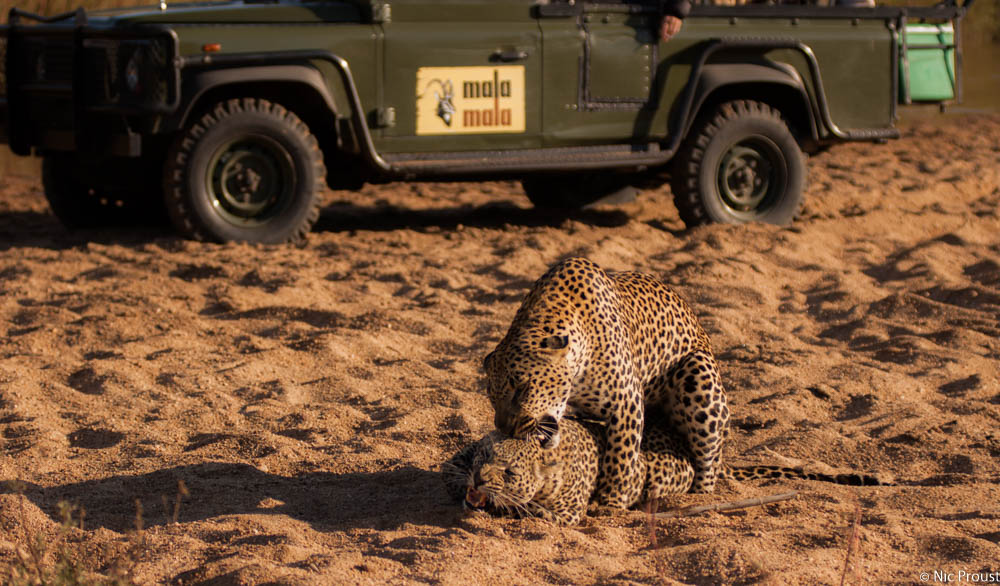 Images 6-8: A sequence shot of the Bike mating with the Kapen female close to where the Kapen River meets the Sand River. This male was a legend. Some males seem to be all force and not mating much but this guy was a playboy and mated regularly with the same and different females. If my memory serves me correctly, in 2006 and 2007 we saw him mating with 7 different females, some of which came far out of their territories to find this most desirable specimen! There is no doubt that his genes reign supreme in the area and most likely what far beyond!

Image 9: Unfortunately his eye was out of focus, but a beautiful moment as he lay down next to my vehicle and within touching distance!

This male leopard was also famous in South Africa as one of the local match companies known as ‘Lion’ used his photo as the cover of one of their boxes. I have it somewhere but need to find it again…what an animal! 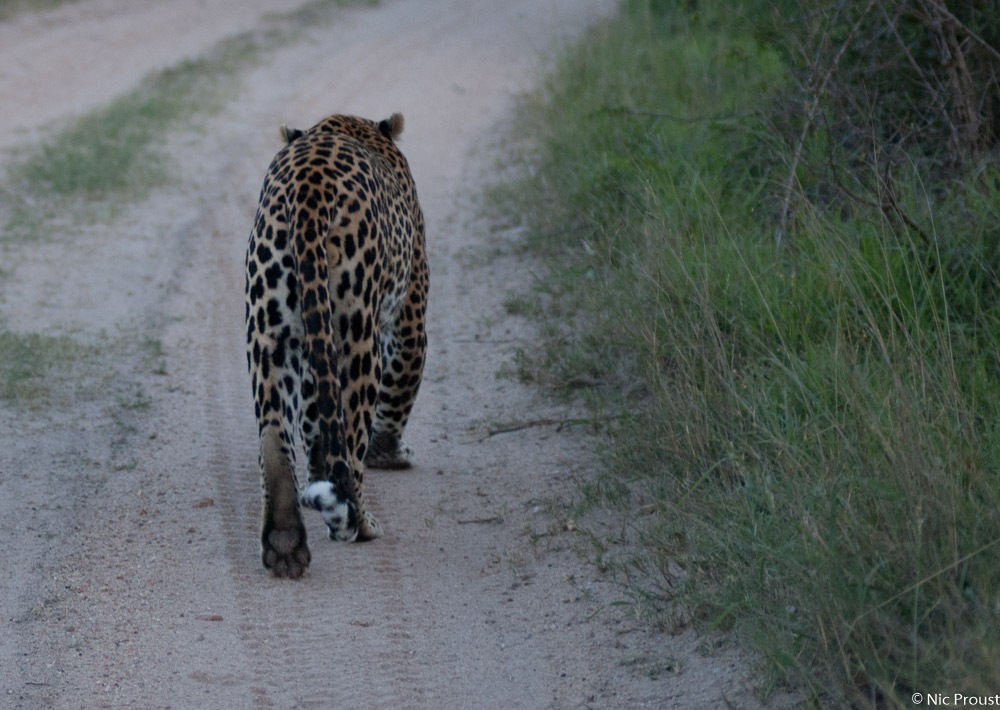